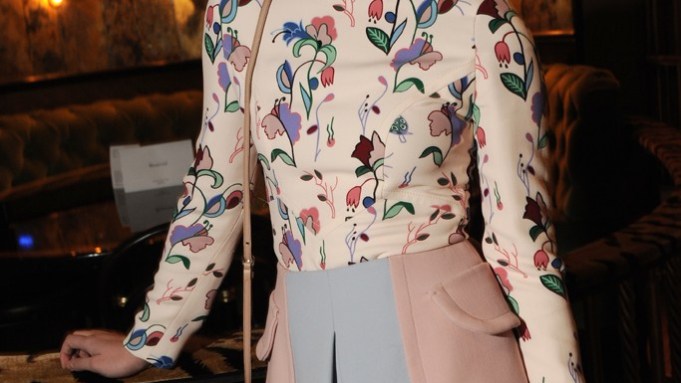 “I’m not the next supreme. I am the supreme,” Sarah Paulson declared. She was making a reference to the television program “American Horror Story: Coven,” which just wrapped its season. She played Cordelia, one of several witches vying to be the next leader of a ruthless coven.

Paulson was at the lavish Diamond Horseshoe lounge in Manhattan Tuesday night for the unveiling of a short film commissioned by Miu Miu that could not have been more different from her show’s shameless camp. “Spark and Light,” as the short is called, is serious and evocative, the seventh in the label’s annual Women’s Tales film series. Riley Keough plays a young woman falling in and out of dreams, so that it was sometimes hard watching it to tell reality from fantasy.

Keough has a few credits to her name but her greatest claim to fame is as Elvis Presley’s oldest granddaughter.

“That was kind of easy in a way to play?” she said tentatively, referring to the dream sequences. “But it was a really fun thing because you don’t get to do that too often when you’re acting — being in a dream, to play in this virtual reality. I felt like a ghost or something.”

Cute Miu Miu outfits figure prominently in these dreams though.

“Exactly! My dream was beautiful, with beautiful wallpaper and beautiful girls and clothes,” she said.

Keough shot in Iceland for three days with independent filmmaker So Yong Kim, who has three features to her name but had never filmed a short before. This was also Kim’s first fashion week, though she doesn’t have a heavy schedule for it.

Hailee Steinfeld, Anna Kendrick, Solange Knowles, Zoe Kazan and Zosia Mamet were some of the young actresses in attendance, and while the party was missing the faces of Miu Miu’s spring campaign — Elle Fanning, Bella Heathcote, Lupita Nyong’o and Elizabeth Olsen — its photographers, Inez van Lamsweerde and Vinoodh Matadin, were present.

The campaign tried to channel the theme of the collection — “young girls pretending to be grown-ups,” van Lamsweerde said. “I was focusing on that brave kid that wears Miu Miu.”

The photographers were in town actually not to attend shows or make an appearance at their client’s event.

“We’re presenting our own jewelry collection,” van Lamsweerde said. “We’re in the Mercer Hotel. We’re doing appointments with buyers and press. Come by!”