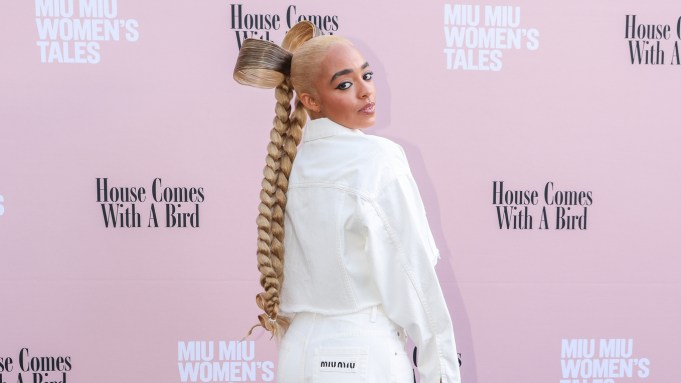 The ongoing short film series, created by women directors, was introduced in 2011 with Zoe Cassavetes’ “The Powder Room,” featuring Audrey Marnay. Showcasing a wardrobe of Miu Miu collections, the Italian women’s brand — Prada’s younger spirit — has tapped the likes of Ava DuVernay and the late Agnès Varda for the project through the years. In 2021, the brand unveiled tale number 22, Tunisian director Kaouther Ben Hania’s “I and the Stupid Boy” with actors Oulaya Amamra and Sandor Funtek.

The latest film, “House Comes With a Bird” screened at Neuehouse in L.A. on Wednesday evening, is by American filmmaker Janicza Bravo.

“I’ve been a long admirer of the tales, and it was awesome to be asked to be included in the company,” said Bravo, who, like all the creators, was given carte blanche. “For me, it was clear this was a chance to play…Clothing is such an instrumental part of my storytelling.”

Lu, a singer and cellist, is making her acting debut.

The opportunity to work with Bravo drew her to the project, she said at Miu Miu’s after party, held at Cara hotel in Los Feliz. “I was a fan of her work for a while and then we started following each other on Instagram.”

“But also, [it was] an opportunity to expand my artistry and my practice, to test my limits and capability and do it in an environment that I knew would be safe,” she continued.

Lu, the star of the night, stood out in her look among the young Hollywood crowd — which included Vanessa Hudgens, Tiffany Boone, Hunter Schafer, Maude Apatow, Rowan Blanchard and Kiernan Shipka, most in schoolgirl-inspired, head-to-toe Miu Miu ensembles (lots of ankle socks and miniskirts). Sporting a white denim Miu Miu jacket and trousers, Lu’s hair was shaped into a giant bow.

“The hair actually came first,” she said of getting ready with hairstylist Rachel Lee. “We wanted to do an ode to the bow, but in a sculptural way. And I was like, ‘What if the ribbons were braids?’ It was just a fun collaborative thing.”

Her nails, too, were striking.

“I never get to do long nails, ever, because I play instruments,” she said. “I was like, ‘You know what, I’m going to do this for myself. It’s my first movie premiere.'”

Created by nail artist Sojin Oh, the design was inspired by the macaw featured in the film.

“These are the eyes of the bird,” she said of the jade pearl details.