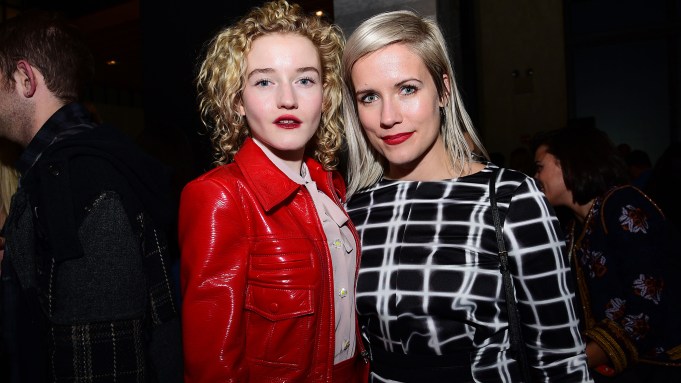 It would hardly be a New York Fashion Week in February without Miu Miu throwing a party for pretty young things in honor of its Women’s Tales film series. This season the brand took over EN Japanese Brasserie in the West Village, a spacious restaurant that was packed to the gills on Tuesday with Miuccia Prada-appointed “It” girls such as Emily Ratajkowski, Julia Garner, India Salvor Menuez and Zosia Mamet. The venue was selected in honor of Japanese film director Naomi Kawase, a regular fixture at the Cannes Film Festival and the director of “Seed,” the most recent installment in Miu Miu’s series. After screening the 10-minute film — like all of the shorts in the series, it centered around cinematography and clothing rather than plot — Hanneli Mustaparta, Leigh Lezark and Mia Moretti sipped sake cocktails and snapped selfies.

Actress Tessa Thompson had come directly from the set of “Smart People,” a play about politics and race that marks her Off-Broadway debut. “It’s been incredible,” she said of the experience. “This week especially, to have my makeup artist rush me off the stage and be touching me up for an event like this…it’s like, only in New York City is this possible.”

Unfortunately Thompson’s schedule is keeping her away from much of fashion week, though she did take in the Rodarte show and plans to attend a dinner for Marc Jacobs following his show on Thursday. “I really wanted to go to that show this year so I am bummed about that, but I’ll go and have dinner and meet Marc, who I haven’t met,” she said. “So that will be cool.”

Her fashion week highlight? “Bill Cunningham took my photograph. And said ‘beautiful’ so that was an accomplishment,” she said. “Last year when I went to the Rodarte party, I spotted him outside and squealed, so this was a nice reversal.”

Another young actress on-the-brink, Mackenzie Davis, seemed a little more overwhelmed than excited to be at a fashion party. “I went to the Creatures of the Wind show, but I don’t know, I don’t think I’m made for fashion week,” she said. “I really like Miu Miu, and I like being able to participate in whatever they do, but beyond that I don’t know if fashion is a world that I thrive in. I find it really exhausting.”

Luckily for Davis, New York Fashion Week is almost over.