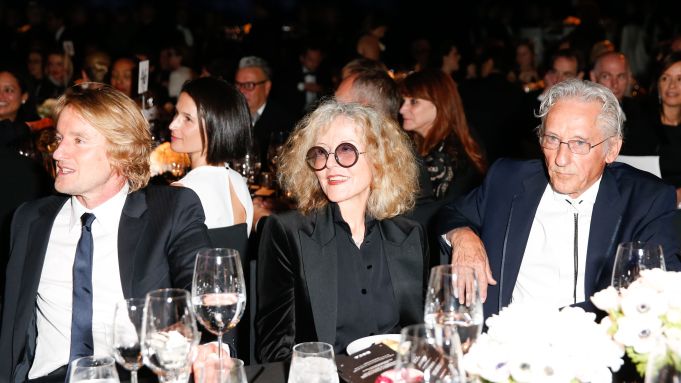 Saturday’s Musuem of Contemporary Art Gala in Los Angeles, honoring Ed Ruscha, drew an artist and art world-heavy crowd to honor the famed Los Angeles artist, whose iconic gas station paintings and words-as-art helped defined the modern art scene not only in L.A. but beyond. It was also a triumphant return for MOCA board co-chair Maurice Marciano, who last year suffered a serious car crash, from which he’s made a recovery. “I think 10 to 20 years ago the only real contemporary museum in the city was MOCA, and now there are so many great institutions,” he said, calling out the Los Angeles County Museum of Art, the Hammer Museum and The Broad Museum, for which Michael Govan, Anne Philbin and Eli Broad came to represent. The Guess Inc. cofounder, who now serves as chairman emeritus, has turned his focus to the art world, building a private museum to house the Maurice and Paul Marciano Art Foundation collection.

There were some Hollywood actors in the crowd, including Elizabeth Olsen, who came with gallerist Maggie Kayne. “I love being able to wear a T-shirt to a gala,” said Olsen, of her cashmere top by The Row. James Marsden admitted he was a MOCA newbie, but said, “I came because I’ve become obsessed with Ed Ruscha’s art, and I really wanted to meet him.” Owen Wilson, an art aficionado and longtime MOCA supporter, narrated the short film about Ruscha that preceded his award. Wilson brought along his younger brother, Luke, though he quickly lost him in the crowd. “Hey, let me know if you see my brother,” said Luke as he wandered around the Frank Gehry-designed Geffen Contemporary at MOCA galleries during cocktail hour.

Man of the hour Ruscha took a typically laid-back and amiable approach to the evening, clearly at ease mingling in the crowd and speaking onstage. “The little train that could roared into town and decided to stay,” he said of the museum, which has persevered through financial and managerial highs and lows. “Not too long ago I thought I reached a high point when I was voted employee of the month at my own art studio. And now this? I’m very grateful.”