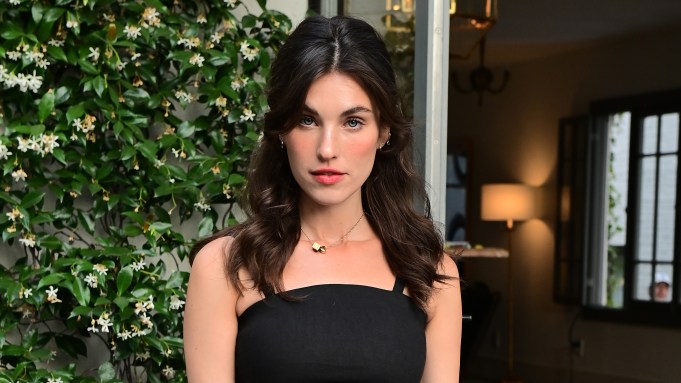 “L.A. is really having a moment,” said Lauren Arapage, cofounder of Anemos — the swim and resortwear brand she launched in the city in 2018 with Joshua Shaub.

“There’s this interesting transition happening right now,” chimed in Shaub. “We’ve seen a lot of fashion shows in L.A., like Dior, Louis Vuitton showing in San Diego. It makes sense in terms of coming out of COVID-19. People in L.A., similarly to Brazil and other places that have city very close to the coast, are all about fashion that also has a function, a resort-like function. I do think that the clothing that we’re making right now with Anemos, you have this level of it being polished and a little refined, but it’s also beach ready. And that feels very of the moment.”

The duo are natives of Southern California, where they’ve returned after relocating to New York. Living and working in L.A., they’ve been creating luxury, minimalist collections in earth tones and with sustainability in mind — acquiring a return customer rate of 27 to 30 percent every month, according to Shaub.

“The shopper everywhere is somewhat the same in that she is conscious of what she’s buying,” he continued. “She’s definitely an affluent woman, but she also cares about the quality of what she buys. We get the same women coming back to us season after season. And she either is buying a new color iteration of what she already has. Or, you know, the woman who had bought from us basically four years ago, she now might be finally replenishing her black swimsuit that’s fading because, of course, sun exposure is inevitable. But she’s coming back to us, because she appreciates the product, which is super nice.”

The designers were at Villa Carlotta in Hollywood, where they threw a cocktail party in partnership with Lucy Akin of Ciao Lucia — the fellow L.A.-based brand launched in 2017 that offers colorful, vacation-ready dresses — to mark the brands’ first capsule collaboration.

“It evolved to be a perfect mesh between the two brands,” said Akin of the collaboration, a retro-inspired line that combines Ciao Lucia’s youthful spirit with Anemos’ minimalist approach.

“It’s very classic yet it’s just a little different than what [Arapage and Shaub] normally do,” Akin continued. “And it has that Ciao Lucia nostalgic vibe to it.”

Out June 15 on the brands’ sites and exclusively on Moda Operandi (Shaub was formerly a buyer at the e-commerce company), the collection features ’60s-influenced swimwear in three styles — off-white, burnt orange and black ($265 for the one-piece, $150 for the bikini top and $160 for the bottom) — as well as a white cotton voile cover-up dress, “Lena,” priced at $290.

“The best thing that’s coming out of tonight is just meeting everyone,” Akin said of the party.

“This is such a beautiful place,” Akin went on, of the venue. Built in 1926, offering furnished, extended stays, the Spanish Colonial-style building was once reportedly home to Jim Morrison. “What’s even better is I live up the street.”