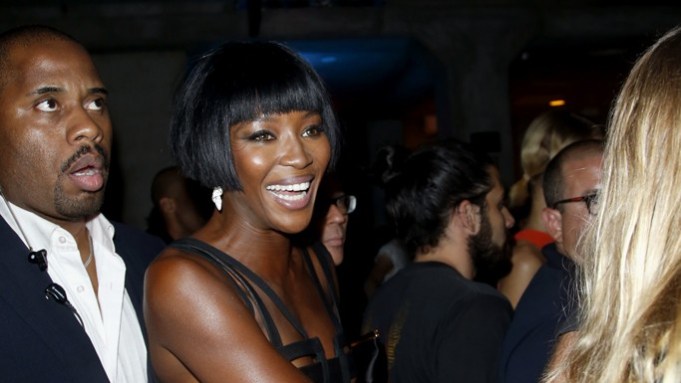 Fashion parties invariably draw a fair share of models. But that quotient was amped up on Tuesday night when Interview magazine celebrated its September model-themed issue at Monarch in New York’s West Chelsea.

“I’ve never felt so short or fat in my life,” one partygoer quipped, scanning the room, highly concentrated with waifs. A gangly Hanne Gaby Odiele slinked towards the back shortly upon arrival. Barbara Fialho, Martha Hunt and Lindsay Ellington fluttered about. Karlie Kloss, her luminous skin flush, promised to send a friend a Karlie’s Cookie before being pulled away by a handler. Marie Piovesan peeled out of the VIP section to greet friends who’d just arrived.

“By having fried calamari and Champagne with every meal,” she said, a satisfied grin across her face, when asked how she’s surviving walking in so many shows.

Constance Jablonski was getting off easy.

“I haven’t walked yet. I’m doing my first show tomorrow,” she said, thumbing her pair of Rodarte earrings. “It’s Michael Kors and I can’t wait.”

Soon alt duo MS MR took the stage, causing Alexandra Richards, in a vampy, supershort leather shift, to hop up on a banquette. Paris Hilton and her beefcake beau River Viiperi basked in the camera shutters before retreating to a corner booth, where Hilton shimmied.

Viiperi was one of the few gentleman models to gain entry to the party.

“There are like 300 male models outside,” one just-arriving partygoer reported. “It’s insane out there.”

“What’s all this?” Jourdan Dunn said outside, hoofing it across the cobblestone street toward the entrance, her eyes looking over the swarm at the door.

“We are at capacity,” a bouncer grumbled to the cluster.

“I’m leaving if they make us wait.” Dunn said to her friend. They didn’t.

Another guest who didn’t have any trouble at the door was Leonardo DiCaprio, who breezed in just after 1 a.m. The actor weaved through the crowd, his newsboy cap tucked down in his face, and installed himself in the VIP section, where he chatted up two blondes.