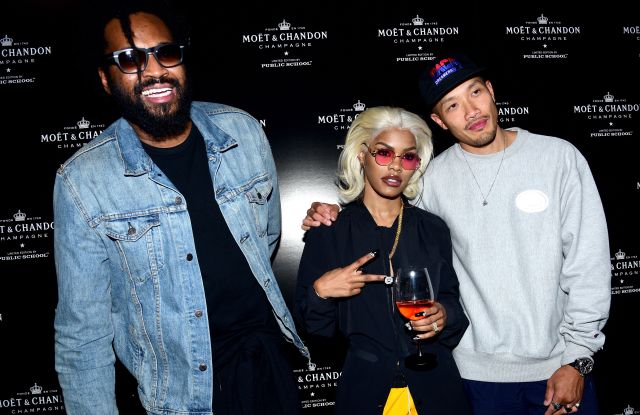 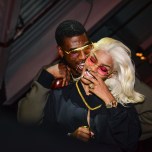 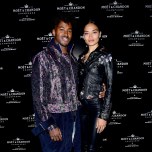 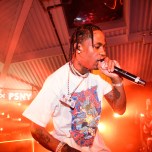 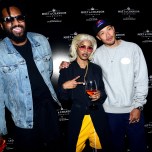 The latter of which came in no short supply throughout the weekend, with bottle-popping moments happening from Uptown to Brooklyn. Weekend celebrations reached a crescendo Sunday evening as throngs of Public School devotees flocked to Fulton Street Market.

In a second floor space that in the light of day could easily serve as a shopping arcade, pals of Maxwell Osborne and Dao-Yi Chow joined the designers to celebrate their collaborative Moët & Chandon bottle design, in addition to toasting their latest collection shown hours earlier.

“Pink and gold is a signature element of what Moët represents and we mixed it with black, which is our favorite color,” remarked Chow. The party’s guests echoed the color palette with their choice of dress. Glasses of Nectar Impérial Rosé Champagne stood in contrast to their mostly black wardrobe.

DJ Ruckus, who was joined by fiancée model Shanina Shaik, warmed up the crowd with a bass-rattling set. “Public School has a really cool following,” he noted. “They’re a young, really cool group of every size, color, shape, age. They get down and party. It’s not like a fashion event where you’re, like, stiff and standing around. Kids get loose.”

Ruckus — whose real name is Greg Andrews — observed how the hip-hop community is embracing fashion more broadly in recent years. “They’ve lost the [homophobia] and baggy clothes. They’ve now gotten sexy and look like rock stars the way they’re supposed to be. Kanye had a lot to do with it.”

Teyana Taylor, still riding the high from her acrobatic runway performance in 6-inch heels at Philipp Plein on Saturday night, floated into the party buffered by an extensive entourage. “I can’t walk in heels so I don’t know how I did that [Plein show],” she said. “I had to bring out the flats tonight.”

The 26-year-old mother skipped the debut of Public School’s latest collection in Chinatown earlier in the day to spend time with her 1-year-old daughter. “I had so much to do with the baby today. I’ve been working all week so I had to stay with the baby, but I made it here tonight.”

As did masses of other people, not many of whom seemed to know each other. A dense river of guests floated aimlessly past several roped-off VIP areas, which were arranged to accommodate the likes of Taylor, husband Iman Shumpert and others like DJ Cassidy, Young Paris and stylist Ty Hunter.

Champagne flowed steadily, of course, including from specially installed drinking fountains that delivered pink bubbly on-demand. Travis Scott commanded the night’s main performance with a wrathful rap set that caused the intense crowd to erupt in a mosh pit of colliding bodies and breaking glass.

At that point, though, glassware was an unnecessary accessory. Just before midnight, the thirsty crowd caused the Moët party to effectively run out of Moët. As the room thinned out, Taylor and her posse made a swift exit, but not before causing what became one of the most entertaining moments of the night.

Parading down a stationary escalator, the diminutive performer saw the opportunity for an impromptu music video. Echoing a Nineties Lil’ Kim — complete with cropped, blonde locks — Taylor began delivering lyrics to the rapper’s 1996 hit “No Time” as a restless crowd bottlenecked behind her.

“I’m the same chick that you want to get with,” she shouted as security turned off the adjacent ascending escalator allowing the masses to bypass and exit.

“It’s fashion week — you never know what’s going to happen next,” exclaimed a member of the rapidly dispersing revelers.