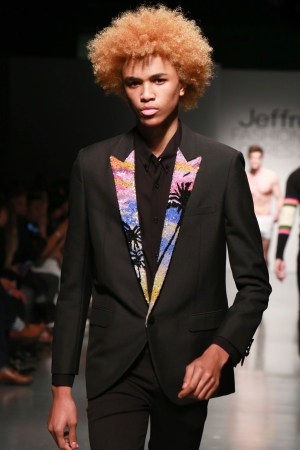 If one needed to get hold of any of New York’s top male models Monday night, chances were they were at Jeffrey Fashion Cares. Since its inception in 2002, Jeffrey Fashion Cares has raised over $5 million for LGBT and AIDS organizations, and has garnered a loyal crowd for its activism, through a silent and live auction and, yes, a men’s fashion runway show.

While many have followed the event through the years — and across the city, from the Intrepid to the Park Avenue Armory to ArtBeam and back again — it was a first visit for both Andrew and Zuckerman. “I’ve donated to ACRIA several times and I’m pretty passionate about AIDS charities in general,” said Zuckerman, who began selling her jewelry line Eva Fehren with the boutique retailer last year. “It’s a cause very close to my heart. I’d never been to this event before so I was really excited to come. I hear it’s really fun — lots of half-naked boys.”

“This morning when I woke up I started to get very nervous, because there are a lot of models here,” the evening’s host Andrew Rannells told the crowd. “I thought ‘maybe I should quick do a cleanse or something?’”

The runway was expectedly lively, given earlier in the evening many of the well-toned, lanky lads took preference to the tequila bar over the quesadilla station. All in a day’s work.