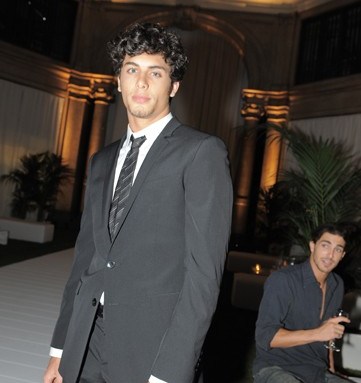 MODEL ARMY: Jesus Luz, who earlier made his European runway debut for Dolce & Gabbana, continued his full fashion immersion at the GQ party in the Galleria Meravigli on Saturday night. “It was incredible,” Luz said of his first major show. Seasoned supermodel and Kylie Minogue’s beau Andres Velencoso said fame hadn’t changed his life too much. “It just that everything I do is documented and half the stuff that’s written about me isn’t accurate. But that’s the price you have to pay, I guess,” he shrugged. Meanwhile, Tom Ford erupted with laughter when GQ creative director Jim Moore showed him the magazine’s July cover featuring a naked Bruno, comedian Sacha Baron Cohen’s latest and most outrageous character. “It’s amazing,” Ford bellowed. Calvin Klein men’s designer Italo Zucchelli was mum about his Monday fashion show, but teased, “Brace yourself. It’s going to be super sexy.” Neil Barrett said he was looking forward to his customary vacation at the Belvedere Hotel in Mykonos with DSquared designers Dan and Dean Caten. “I’ve designed the hotel’s uniform,” Barrett said proudly. The Caten twins had more immediate concerns. “We’ve got to go back to the office,” Dean said. “We’ve been working like slaves.”