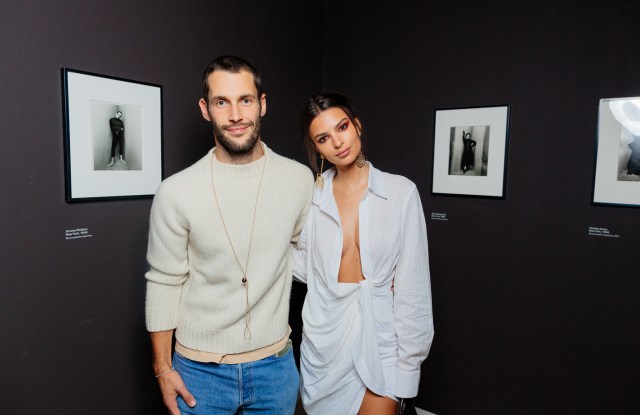 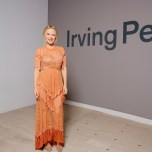 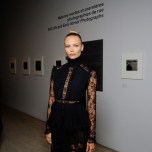 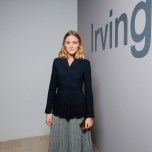 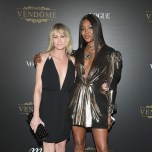 PENN PALS: A river of industry movers and shakers and models du jour attended a Vogue Paris  private viewing of the Irving Penn exhibition at the Grand Palais on Sunday night, followed by a cocktail and party in one of the site’s exterior galleries and an adjacent room hung with hundreds of disco balls.

Organized by the Metropolitan Museum of Art, New York, and the Réunion des Musées Nationaux-Grand Palais, in collaboration with the Irving Penn Foundation, the show marks the first major retrospective of the American artist’s work in France since his death in 2009. On display are more than 235 photographic prints from across Penn’s 70-year career, all produced by the artist himself, as well as a selection of his drawings and paintings.

Glued to the portraits at the start of the exhibition, Dita Von Teese said she had always been inspired by the photographer’s sitters because they used to do their own hair and makeup, and knew how to do their clothes. “And this was before the business of fashion; they’re women I really look up to,” she said.

Her chaperone, Jean Paul Gaultier, was equally enchanted. “I didn’t go to fashion school, my school was looking at books and photos, and Penn knew how to make the models pose in a certain way that often made the clothes look more beautiful than they were in real life; he created extreme beauty with the way he created silhouettes.”

Makeup artist Tom Pecheux, who got to work with Penn, said: “It’s the same as the major athletes, when we see them do incredible achievements, it always looks so effortless, and that’s what he managed to do. He was a man who had a vision and he photographed that vision. Everything appears so simple, but there’s a real intellectual and creative process behind it.

Simon Porte Jacquemus, who had already seen a smaller version of the exhibition in New York, said he’s a huge fan of Penn’s photos of workers, and his still lifes, while Natasha Poly couldn’t get over how modern his work feels. “I can’t believe some of the pictures were shot 70 years ago. It’s amazing to see portraits of people like Marlene Dietrich. There is so much life in the pictures.”

Adwoa Aboah, who has always been a fan of Penn’s work, lauded “the sheer performance of it all, which, I think, is lacking in a lot of fashion photography these days.” The model said she has some projects planned around her Gurls Talk mental health community platform for December.

Poring over the still lifes, French leather goods designer Edwina de Charette, founder of LaContrie, revealed she’s working on a collaboration with Miami retailer The Webster for the opening of their store in New York this fall, based on images of spins on her bags inspired by camera lenses.

Talking to Christopher Kane by a selection of Penn’s nudes, meanwhile, Jonathan Saunders said the influence of Penn’s work on so many photographers across the decades really comes through. “What strikes you is how incredibly modern some of the works are. The still lifes as you walk in, capturing such strange collections of objects, look like they were photographed yesterday. And the color is so intense and rich,” said Saunders, who was also enjoying the chance to catch up with people.

“It’s a wonderful crowd, what’s interesting is that typically at these openings everyone’s talking to each other and not really looking at the work, but I think I’ve noticed more people looking at the work than any other exhibition I’ve been to. People are mesmerized by it.”