STAR STRUCK: Anna Wintour is not the only figure in the fashion industry to be enthralled with Roger Federer — count Bernard Arnault, too.

In a speech honoring the tennis legend, a brand ambassador for Moët & Chandon, the luxury titan’s trademark poise gave way to boyish enthusiasm. Describing a match, he simulated the player’s focus with narrowed eyes and animated hand gestures. He had to say it, and he did, finally, with incredulity:

Guests were relaxed and elegant, snacking on seabass sushi with large gold goblets of Champagne in their fists. The Pavillon Ledoyen, Yannick Alléno’s historic restaurant in a grassy meadow at the bottom of the Champs-Élysées, was decorated with wildflower bouquets; candles flickered from their bamboo cages while a woman sang jazzy renditions of songs like “American Boy.”

The Swiss tennis man took in the praise with aplomb, explaining that he still felt like the young player in the short film that had just flashed by on the wall behind him — a succession of trophies and hairstyles collected over the years.

He recalled his first win.

“When I won in Milan, I thought at least I have won one title in my career, at least I succeeded in something.” 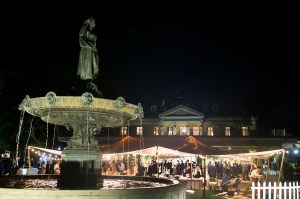 The Champagne house handed Federer a magnum-sized bottle wrapped in a leather band and filled with a Grand Vintage from 1998, one of 20 for sale starting next month; profits from the $20,000 bottles are to be donated to Federer’s foundation for educating underprivileged youth.

Arnault’s son Alexandre Arnault, who was catching up with his sister Delphine Arnault, remembered a tennis match with Federer and his father.

“He and Roger played against my brother and me — and we managed to score a few points. In the beginning it was a bit intimidating, but Roger — he’s accommodating,” recalled the towering youth.

Virgil Abloh said he is also a tennis player.

“It’s one of my favorite sports, I’ve been playing for a while, the past couple years,” he said, matter-of-factly.

Rugby man Dan Carter professed a preference for cricket, which he used to play in summers in New Zealand. But the sport is not very well known in France, he noted ruefully. The former All Blacks star currently plays for the French team Racing 92 on the outskirts of Paris.

“When you play sport at the highest level, you often look at other sports and sports people — Roger Federer is one of the sports people you look up to,” he said, before sidling over to the tennis man for a chat once the flurry of selfies with Federer had begun to subside, late into the evening.