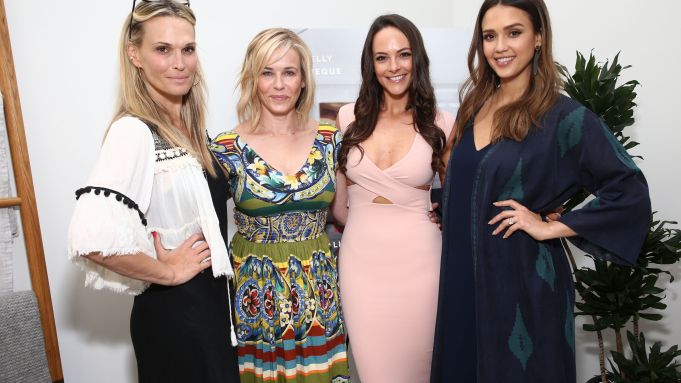 “Molly has a great story,” Chelsea Handler said while perched at the end of a bed as she coaxed Molly Sims from the room’s entry hall.

The two were sitting in a bedroom Tuesday afternoon alongside Jessica Alba and Kelly LeVeque, the celebrity nutritionist whose book “Body Love” they were celebrating, as the rest of the luncheon guests mingled just outside.

“I have a great story,” Sims said taking a seat alongside Alba before talking about her recent successes with weight loss.

The four were part of an intimate group, totaling about 15 in all, assembled at the Parachute Hotel, a luxury penthouse in Venice Beach, to nosh on organic chicken, pan-seared branzino, sugar snap peas and cumin- and coriander-dusted squash among other tasty offerings in celebration of LeVeque’s book due out June 27. The nutritionist has amassed a following of Hollywood devotees with her focus on what she said is a food philosophy rooted around the idea of rooting out the drama in food and weight loss with a focus on protein, fiber, healthy fats and greens.

The nutritionist said she expects to release a protein powder in September and is otherwise waiting to plot her next move saying, “Let’s see how the first book goes.”

If celebrity endorsement is any indication, all should go well as Alba, Handler and Sims sang praises of LeVeque’s approach to health and wellness.

“I have 10 pounds that just won’t go away and I’m super tired in the midmorning,” Alba said. “I’m tired midafternoon and I don’t know what’s going on and I feel like I eat healthy and I don’t have a ton of time to exercise and I’m never going to stop drinking. So a friend of mine [said] ‘Oh I have someone who has a really balanced approach to nutrition where you don’t have to become somebody else and you lose inches.’”

“That’s something that resonates with me too because I’m so locked into a number,” Handler said. “If I go over that number it completely ruins my day so it’s nice to get detached from the number on the scale.”

Handler is set to detach in another way as she gears up to get unplugged and go on vacation. The comedian, who currently has a talk show on Netflix, said her next big step will be in the form of a break, “I have got two weeks off to be exact,” she said.

For Sims, who says the near future for herself consists of “changing a lot of diapers,” she faces a looming deadline with HarperCollins on Thursday when she is due to turn in her book “Everyday Chic” expected out Oct. 10.

And for Alba, it’s all work with a bit of a break when she can be with her kids.

“I’m just at the office everyday and I’m looking forward to spending some time with the kiddos and just getting away and being with them,” she said. “They’re growing so quickly. It’s so sad; the year flies by so it’s nice to spend the time in the summer with them.”

For More Eye Coverage in WWD: