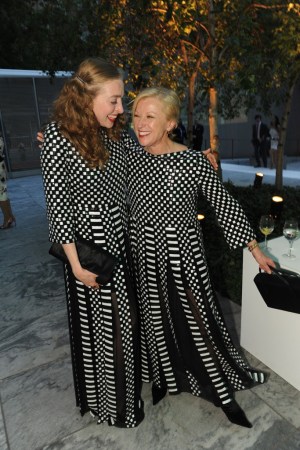 Though the Museum of Modern Art also honored Mayor Michael Bloomberg and Cindy Sherman on Tuesday night at its annual Cartier-sponsored Party in the Garden, the crowd delivered an outsize dose of love to the event’s third honoree, Ellsworth Kelly. And with reason: The artist was exactly 10 days short of 90 and a few days away from the MoMA opening of an exhibition of all 14 pieces in his 1970 “Chatham Series.”

“This is not about me, it is about trying to do something for one of the great museums in the world and for two great artists; and I’m lucky enough to represent the city,” Bloomberg said during cocktail hour after walking the step and repeat. Asked if his impending exit from City Hall might give him more time to spend in New York’s museums next year, Bloomberg was characteristically blunt: “I can’t spend less.”

After cocktails, guests moved inside for dinner. Sherman and Rachel Feinstein, who both wore the same black-and-white Marc Jacobs gown, were seated next to each other. As museum president Marie-Josée Kravis (who wore a color-blocked dress adapted from an early-Fifties Kelly painting that Calvin Klein Collection recently reproduced) ended her toast to Kelly, the artist rose and gave an impromptu speech. “For young artists, The Modern is the first place,” Kelly said, as his endearingly free-form reminiscence was met with plenty of “awwws.” After dinner, and a “Happy Birthday” serenade by Renée Fleming, the crowd moved back to the garden, where a younger set of patrons had set up to watch a mini concert by fun, the band.