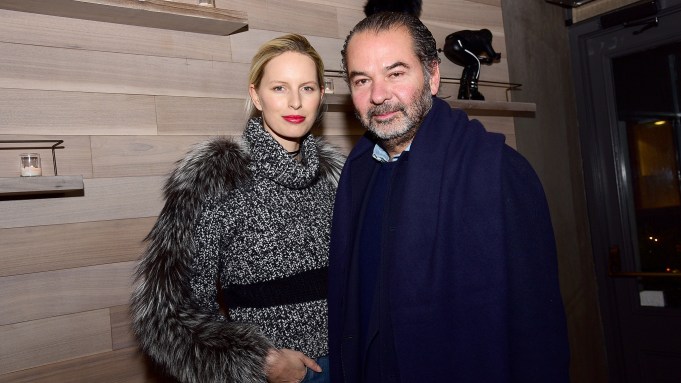 While revelers uptown at the new Diesel flagship partied against a backdrop of Joe Jonas and Travis Scott performances, downtown Moncler hosted a much tamer affair. At the Italian restaurant Tutto il Giorno on Franklin Street, Karolína Kurková, Naomi Campbell, Carine Roitfeld and Miroslava Duma gathered to toast the brand’s fall fashion show — an outdoor (yes, outdoors), extravaganza on the plaza of Lincoln Center. Guests were happy to be inside.

“I’m keeping warm and bundled up,” said Anna Cleveland. “I’m dressed in layers, wearing a mix of vintage and a Zac Posen jacket. These vintage pants are from my mom.” That would be Seventies model Pat Cleveland. “I go in her closet a lot,” the younger Cleveland continued. “You can’t help yourself. You see the goods, you want the goods.”

Victor Cruz was taking it easy following his ambassadorship for New York Fashion Week: Men’s at the beginning of the month. “I haven’t done much, but I did go to see Kanye at Madison Square Garden. I was obviously dying to see the clothes, but the music was actually what drew me to the event,” he said. “Kanye never disappoints — he always hooks it up. I’m just happy that the vintage Kanye West is back. It’s what we all wanted, it’s what we all needed. And I think he delivered that.”

As guests Waris Ahluwalia (successfully back in the States after being denied from boarding an Aeromexico flight), Lauren Remington Platt and up-and-comer musician Travis Mills took their seats, people finally began to shed their coats. But Cleveland, for one, was enjoying the cold.

“I’ve seen a blue fur. I’ve seen high heels with ice wedges. I’ve seen women throwing scarves all around their necks in a very chic way,” she said. “I like the fact that people are freezing and they have to interpret it.”