The third annual Art + Film Gala, chaired by Eva Chow and Leonardo DiCaprio and sponsored by Gucci, drew stars from both worlds on Saturday night. 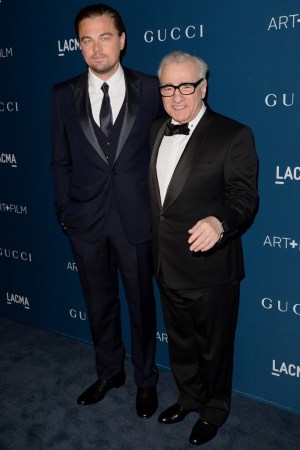 Inside the specially constructed dinner pavilion, Duhamel showed Hudson iPhone photos of his son, while an expectant Wilde and Sudeikis also talked babies with new parents Wood and Bell.

“It’s great having the opportunity to bring together the communities of fashion, arts and movies, like a dream for me that became real,” said Gucci creative director Frida Giannini, who designed custom gowns for Hudson, Beckinsale and Wood for the occasion. “We are all passionate about the arts and movies, so the LACMA event is the perfect link between everything we do.”

On a more personal note, Giannini added that she was also looking forward to chatting up her dinner partner and the evening’s performer, Sting. “I love music and Sting has always been my idol so I can’t wait to have a conversation with him,” she smiled.

For Adams, the event has become a yearly date night for her and fiancé Darren LeGallo. “It really is our annual tradition,” she said.

“It’s so elegant and fun, and I wouldn’t miss a chance to honor Martin Scorsese,” said Beckinsale, who played Ava Gardner in his film “The Aviator.”

DiCaprio, who has starred in five Scorsese films, introduced his friend and mentor by saying, “When you walk into a museum like LACMA, you are faced with precious works of art. When you meet Marty, you feel the same way because spending time with him is like walking into a world-class film museum. When you work with him, you have the privilege of becoming part of history.”

Scorsese had screened a newly restored version of “Rebel Without a Cause” at the museum the night before. He said he had spent many hours at the museum in the Seventies watching films, and that Hockney was also a great influence on his work, particularly in “Taxi Driver.” “Cinema exists in the ongoing conversation of our lives. That’s why for me it’s so important to preserve it,” he said.

Hockney, who had been absent from Los Angeles for some time, made a return for the gala and the opening of the exhibition at LACMA. “I was only on location in England,” he said. Some of his most famous works were painted in Los Angeles, a city he arrived in almost 50 years ago when the museum was first being built.

Afterward, DiCaprio went to congratulate him, saying, “I’m a collector of art myself, but I haven’t had the privilege of buying one of your paintings because they’re so goddamned expensive.”