Caroline de Maigret was among the attendees. 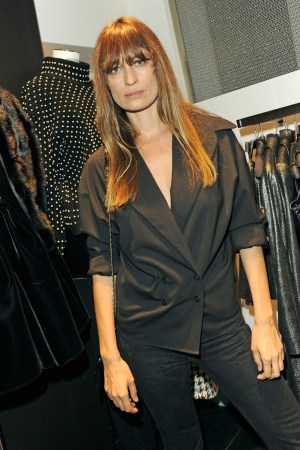 NEW DISCOVERIES: Retailer Liliane Jossua threw a cocktail party Tuesday night in Paris for designer Anthony Vaccarello at her Montaigne Market boutique, and boasted that 90 percent of it sells out before the sale period in France. “People think you have to have the perfect body to wear it, but it fits everyone,” she enthused. Her latest discovery is a Brazilian designer called Fernando Jorge.

Vaccarello said he was headed to Los Angeles for a vacation: “The way people live there is very inspiring and you don’t bump into someone every five minutes like in Paris,” he said.

Caroline de Maigret divulged she is finishing a book. “I worked [on it] for a year,” she said. “It is a collection of stories about women, mostly Parisian, but not only. It’s really an excuse to talk about women in general and make fun of ourselves. It’s a very funny book.”

Novelist Anne Berest, scriptwriter Audrey Diwan and movie producer Sophie Mas are joining her on the effort. “We meet every week, write in French and then it’s translated into English.” The book is due out in September 2014.