The Monaco royal stars in the new advertising campaign for Montblanc’s Bohème line of watches and jewelry. 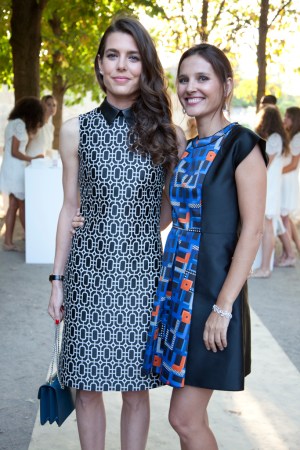 FLY ME TO THE MOON: Montblanc capped off Paris Couture Week with a dinner in the Tuileries Garden on Thursday to celebrate its brand ambassador, Charlotte Casiraghi, and the latest additions to its Bohème line of watches and jewelry.

A crescent-shaped window on the dial displays the name of the full moon of each month given by ancient cultures, such as Chaste Moon for March and Hunter Moon for November. The lunar theme also inspired the dinner menu, with a prawn starter that was topped with a white orb made of frosted coconut milk.

Blogger Chiara Ferragni, aka The Blonde Salad, said she was taking a Mediterranean break before heading to Los Angeles in September to launch her shoe line at Nordstrom.

Casiraghi spent the meal in animated discussion with Montblanc chief executive officer Jérôme Lambert, but the Monaco royal maintained her Garbo-like policy on talking to press. She joined guests in watching a short behind-the-scenes film of her upcoming campaign for the Bohème line, which shows her stroking a white owl.

Niney, a friend of the brand who frequently attends its events, will be seen later this year in his first English-speaking role in “Altamira,” which features an international cast including Antonio Banderas, Rupert Everett and Golshifteh Farahani.

Fortunately for casting directors, he has not picked up an Australian accent from his girlfriend Natasha Andrews. “I also have a lot of trouble understanding Australians. It’s one of the only accents that I can’t do at all,” he admitted.

The French actor, who won a César award for his portrayal of Yves Saint Laurent in the film of the same name, said he was gearing up for intensive diving lessons for his upcoming role as Philippe Cousteau in “The Odyssey,” which will co-star Audrey Tautou and Lambert Wilson.

In a case of one degree of separation, Ledoyen also stars with Wilson in her next film, “Enragés” (or “Rabid Dogs”), a hold-up movie in which she draws the short straw. “I’m a hostage. I am kidnapped and gagged,” she said.

It wasn’t the first time the star of “The Beach” had dined in the Tuileries, though she usually doesn’t wear an evening gown. “There is a nice little restaurant over there – nothing to do with fashion week,” she pointed out.