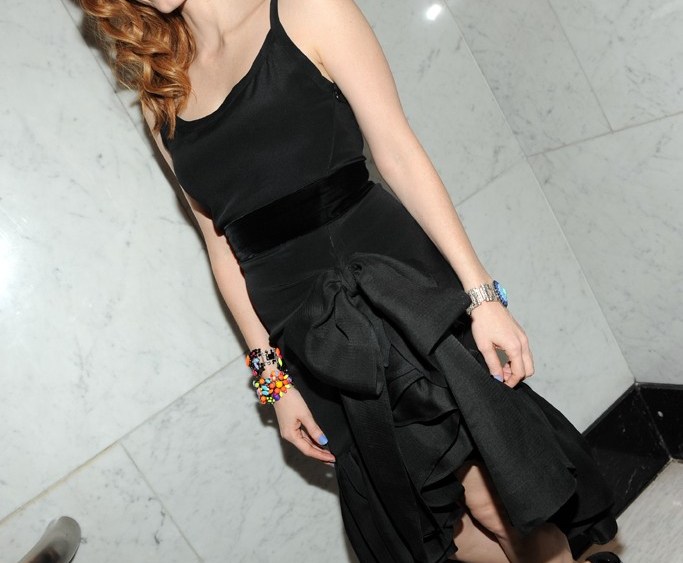 On Monday night in the lobby of the Paley Center for Media in Midtown Manhattan, Shia LaBeouf was pulling off a rare celebrity double descriptor: intense affability. Or maybe it was affable intensity.

“I’m wearing a thermal onesie. Did you wear yours also?” he said, citing his sweat as he politely declined a handshake. “It’s f—ing killing me, dude. It’s killing me. It’s such a bad move today.”

The high temperature in Manhattan had been 84 degrees that afternoon.

LaBeouf was on hand for a screening of “Lawless” presented by the Cinema Society and Manifesto Yves Saint Laurent. Dressed in a well-tailored brown Gucci suit and dark dress shirt, the actor did not look very sweaty, though his longish hair was slicked back into a little ponytail and he did have the beginnings of a neck beard going on. The animated LaBeouf proved the main attraction for the press line as he played lightning-round autobiography. He riffed with reporters on his inability to hold his liquor, at least one public fight caused by that inability and a recent video for the Icelandic post-rock band Sigur Rós, for which he had gone full-frontal nude. So about that onesie, then.

“I was feeling, like, a little insecure in the hotel room,” LaBeouf said. “I was, like, you know, I should probably have my onesie with me. It always makes me feel good. Anyway, let’s talk about real stuff. What’s going on, dude?”

The John Hillcoat-directed “Lawless” is about a trio of moonshining brothers set in Prohibition-era Virginia. Given that it takes place between the passage of the 18th and 21st amendments, did LaBeouf have any addendum he might like to add to the U.S. Constitution in its current state? (That the question was not real stuff, and was instead completely hypothetical, did not seem to bother the actor.)

“I would do the same thing they did for alcohol for marijuana,” he said, referring to the latter amendment. “You’re in the middle of a marijuana prohibition. You’ve got all this money going across to Mexico. You’re feeding cartels. You’re building these Mexican cartels up past Al Capone levels. They have militias, and they’re taking over Mexico. I mean, it’s sort of a no-brainer when California’s f—ing bankrupt, and our biggest crop there is marijuana. For me, it’s a losing battle — the battle on drugs is a losing battle, and has historically been this way since its inception.”

And with that he was onto his next interview. LaBeouf was joined at the screening and after party at Gallow Green, at the McKittrick Hotel, by cast mates Jessica Chastain and Dane DeHaan. Others in attendance included Chloë Sevigny, Melissa Leo, Seth Meyers, Harvey Weinstein and Lissy Trullie.

Chastain, the new face of Manifesto Yves Saint Laurent, wore a ruffled black slipdress with an oversize hip bow by the label. She had a more quiet take on the question of the evening.

“I don’t know how to say it in a poetic way that our forefathers would have written, but I definitely would give everyone the right to marriage,” the actress said. “For me, in this country, that’s the one thing that we’re missing.”