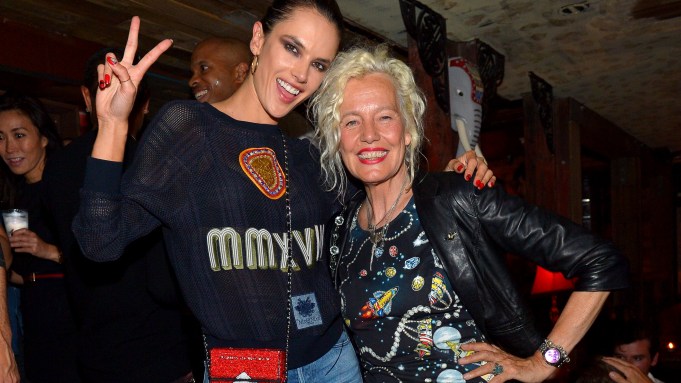 Once his circus-themed Moschino runway show was over, Jeremy Scott wasn’t ready to part with the festive theme, so he kept the party going by cohosting the opening night of Jonnie and Mark Houston’s newest Hollywood club, Madame Siam Sideshow Emporium.

The fete drew many who had attended the show at the Los Angeles Equestrian Center in Burbank, Calif., including January Jones, Emma Roberts, Paris Jackson, Jaime King, Sasha Lane, Isabela Moner, Anthony Kiedis, Billy Idol, China Chow, Alessandra Ambrosio and all the other models, and also drew late-night guests Kristen Stewart, Robert Pattinson (though not together, as Stewart was there in support of her gal pal Stella Maxwell, who modeled in the show) and Jeremy Renner.

It was probably the only time that such VIPs patiently waited in line outside the doors on Hollywood Boulevard, but such is the power of Scott and Moschino’s party spirit. After mistakenly queuing up in front of the entrance to another section of the club, where the bouncer offered a prequel to the magic show inside with a card trick, the group of early-comers (who clearly got a jump on the black car and Lyft services being offered from the show) then filed into another line while the bouncer called up the guest list on his iPhone.

Once inside the basement-level warren of rooms, guests were treated to the musical stylings of DJs Mia Moretti, Soo Joo Park, Io Echo, Alex Chapman and Myles Hendrik. It would’ve been destined to become a sweaty dance party eventually, but it happened sooner than later due to the non-working air-conditioning. To cool off, guests ventured into other hallways and rooms that featured carnival games like ring toss and shoot-the-can and more live circus performances.

Emma Roberts and her stylist friend Brit Elkin posed for a photo booth, the forgot to take their black-and-white prints. Nearby, China Chow smooched with her new love Billy Idol and captured the whole thing on Instagram live. One of the most popular carnival games featured a large wooden visage of Donald Trump, whose open mouth contained black plastic blocks that guests were invited to knock down with bean bags. “Go ahead, work out your anger, really swing for the fences,” the booth operator encouraged. After all, the prizes included Moschino sunglasses, iPhone cases and ties.