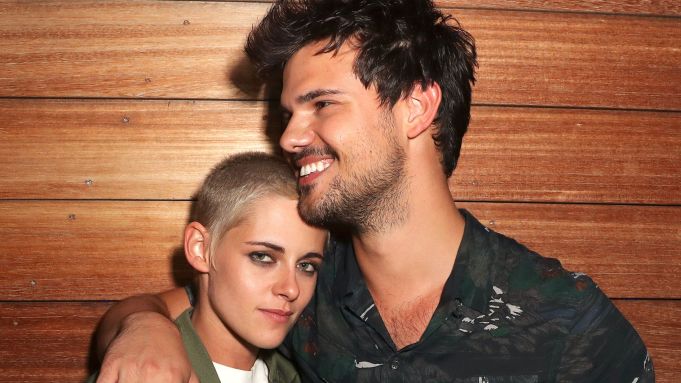 The designer said he drew inspiration for the collection from his Western travels. “I thought about the road trip between L.A. and Las Vegas. All of that Americana is so rich and gorgeous, from pinup girls to hot rods. It’s that optimism that’s part of America, especially right now with so much negativity from the top. I thought it was important for us to remember why we love America.”

Kaia Gerber popped into the after-party with older brother Presley, who walked in the show. “I’m so proud of him,” she said of her brother before singing Scott’s praises. “Jeremy is the most creative designer. You never know what to expect from him, but it’s always something fun and young. Everything I saw in there, no matter if a guy or a girl was wearing it, I wanted to have.”

Dita Von Teese was still raving as well. “I loved all of the pinup appliques on the Thirties dresses,” she said. “It’s great to see somebody like Jeremy, whom I think that Franco Moschino would have been really proud to have at the helm. He’s obviously the perfect fit.”

Sasha Lane took in the party’s sweeping view of the city as she reflected on the show. “I loved the whole vibe of it — the Seventies vibe mixed with Playboy,” she said.

“I didn’t have any idea how amazing it was going to be,” Angela Sarafyan said. “The minute I walked in, it was like a fantasy. I love that kind of freedom of expression. Jeremy doesn’t stick to tradition.”

“I’ll be begging Jeremy for the wraparound suit with the flames on it—for sure,” said Serayah McNeill. “Everything was so chic yet fun. The flames, the platforms, the sheer dresses…I really loved it.”

“It was totally Jeremy,” artist Rosson Crow said of the show. “I helped work on the set design. It was Jeremy’s idea to use all of the signs, but he asked me to help him arrange everything. They came on a truck yesterday and it was like doing a life-size collage with sculptural elements.”

While Jonas didn’t make it to the party himself, WWD caught up with the singer earlier at the show. “I loved seeing all of the iconic signs,” he said. “Jeremy always does fun, exciting, loud clothing. That’s what our band is about. We support him and we love him.”

Diplo couldn’t make the post-show festivities either. His excuse seemed especially fitting given the latest collection’s nod to a certain vibrant city. “I have to play in Vegas tonight, so I’m leaving here right after the show’s done.” But he was eager to make a fashionable pit stop because Moschino is “one of my favorite shows.”

Vanessa Hudgens said she’s been a longtime Moschino and Jeremy Scott devotee as well. “I think he has such a strong sense of self and he knows who he is and he’s not afraid to show that in his work,” she said. “His runway shows are so uniquely him and that’s why we love him.”

Liberty Ross skipped the after-party, but attended the presentation with her daughter Skyler. “This is her first runway show,” she said. “We’re always so enthused to see what Jeremy comes up with next, so we’ve been having a guessing game in the car, wondering what we’re going to see today.”

“He’s always fresh,” said Kate Beckinsale, who added that she was particularly excited about the show’s Los Angeles location. “It was very convenient for me because I live here.” Olivia Holt agreed. “I haven’t been to very many shows in Los Angeles. To not have to get on a plane to go all the way across the United States is a cool thing.”

Back at The Roosevelt Hotel, the party was still going strong well past midnight. Just how late did Scott plan to stay out? “They’re closing up shop at 2 am,” he said, with a shrug. “It’s L.A.”