For the past week of the U.S. Open, the Champagne producer Moët & Chandon has courted tennis fans in the fashion world in its box at Arthur Ashe Stadium. 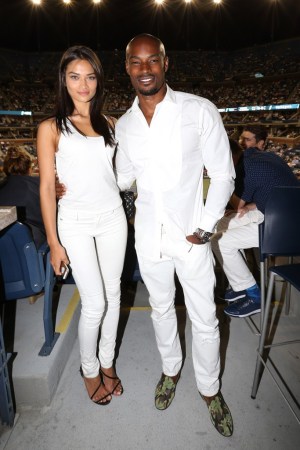 For the past week of the U.S. Open, the Champagne producer Moët & Chandon has courted tennis fans in the fashion world — Karlie Kloss, Cynthia Rowley, Charlotte Ronson, Jessica Stam — in its box at Arthur Ashe Stadium. On Thursday, Misha Nonoo snuck in some tennis in between castings and fittings before her fashion-week berth on Friday.

“We still have a week,” she said. “We have 75 percent of the collection done.” The Bahrain-born, London-raised designer had come to see Andy Murray play.

“Watching Murray tonight, you kind of have to feel some patriotism,” she said. Tyson Beckford is more of a Serena Williams fan. He appreciates her life story, but also “that very muscular body. You can’t miss her when she walks in a room in a little black dress.”

Beckford, who came with the model Shanina Shaik, continues to be a familiar face during fashion week, though lately, more as a personality since he transitioned away from the runways to focus on acting. He recently completed a new film called “Chocolate City.” Its director, Jean-Claude La Marre, has described it as “Magic Mike” “for the African-American female audience.” Beckford plays an aging stripper, the Matthew McConaughey role, if you will. Beckford said not to draw too close a comparison with the Steven Soderbergh film.

“It’s a little more serious about the stripping business and the jealousy that goes on in it,” he said. “There’s a lot of jealousy because there’s a lot of money to be made. Some nights, the guys make anywhere between $2,000 and $10,000.” How does that compare to modeling?

“There’s no comparison. I guess it’s better to be a model,” he said, then reconsidered after some thought. “If you don’t make it as a model and you decide to strip at night to get yourself through college, it’s not bad.”

After Murray won the match, Danilo Gallinari, a Denver Nuggets small forward, lurched over from the suite next door.