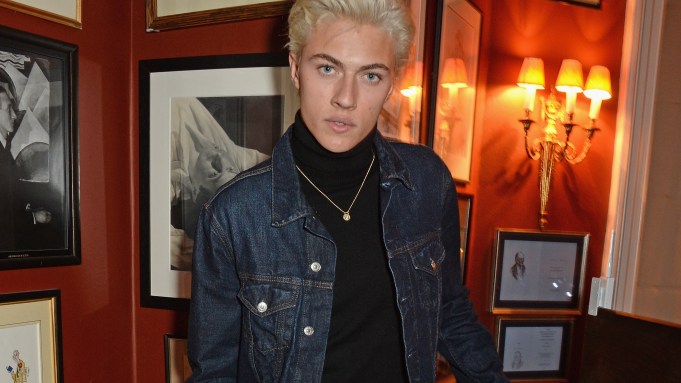 MAD MEN: Things were getting wild at the Savile Club on Saturday night. “Oh! I’m drunk,” giggled actor Richard Madden at the party thrown by Mr Porter to celebrate its fifth birthday at the historic club in Mayfair. Stiff martinis served by Peter Dorelli from The American Bar at the Savoy were the likely cause of that admission.

“I have been in Italy for six months filming ‘Medici’ with Dustin Hoffman,” Madden told WWD. “I just got back and just want to see my friends; I literally haven’t seen them for ages.”

Yoox Net-a-porter Group chief executive officer Federico Marchetti was also celebrating a birthday this weekend. “I am also Pisces, like Mr Porter,” he said, joking that he’d had to get dressed for the party on the way from the airport. “I landed an hour ago and fly back to Italy first thing in the morning so that I can be back in Lake Como for my birthday lunch.”

Lucky Blue Smith was having trouble remembering the last time he received a birthday present of any kind. “I just prefer giving gifts to getting them,” he said. “Like when my older sister moved into the new apartment, I bought her all the furniture for her room. I like doing things like that.”

The party was set across several rooms of the labyrinthine club, where cocktails served by handsome bowler hat-wearing waiters from the Cellar Society disappeared from trays as soon as they appeared. Guests had to pass through a Narnia-esque wardrobe door hung with tailored jackets to reach Dorelli’s potent martini bar, while cigars, caviar and vodka were being enthusiastically consumed in the terrace garden, where Luke Evans, Roland Mouret and Jack Guinness could all be found.

Evans stars as Scott, the husband of the missing Megan Hipwell in the upcoming film of “The Girl on the Train.” “I have got a really exciting film coming up but I can’t breathe a word about it, but it’s big, big, big. My lips are sealed,” he said flashing the grin that earned him the role of Gaston opposite Emma Watson in Disney’s upcoming live-action version of “Beauty and the Beast”.