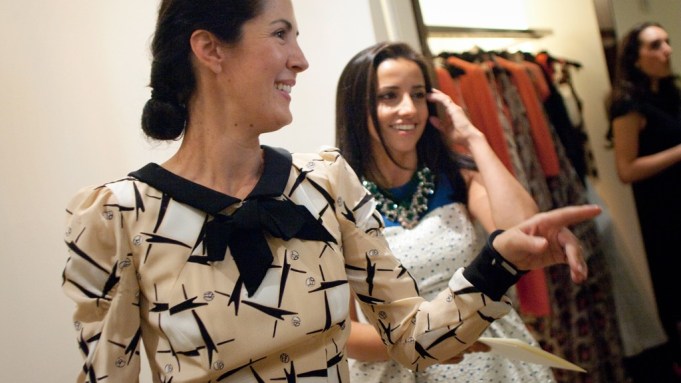 “I know these ladies really well. We’ve all known each other forever,” said Patricia Herrera Lansing after posing for a photo with Allison Aston, Veronica Swanson Beard and Shoshanna Lonstein Gruss at a pre-celebration for Society of Memorial Sloan-Kettering Cancer Center’s Associates Committee’s Fall Party on Wednesday evening. (The main event will be held Nov. 13 at the Four Seasons.)

“It feels a bit like coming home,” she said. That is, if home resembles the three-story Carolina Herrera flagship on Madison Avenue and your friends are among the well-heeled (and predominantly blonde) likes of Charlotte Ronson, Dani Stahl, Lauren Santo Domingo, Joanna Baker de Neufville, Bara Tisch, Emilia Pfeifler and Eleanor Ylvisaker, all of whom turned out for the affair.

“When [Shoshanna] asked me to get involved with MSK, I thought, ‘OK, why not?’” said Herrera Lansing. “Everyone’s touched by cancer in some way or another, and anything to do with pediatrics is so important to me. I just couldn’t say no. And Shoshanna knows where I live, too. So I really couldn’t say no.”

Most of the action was concentrated upstairs on the second story, where guests indulged in a digital photo booth. DJ Coleman took care of the soundtrack while four models circulated the party, showing off looks from Carolina Herrera’s fall and spring collections (a percentage of the proceeds from anything purchased at the party benefited the cancer center). “I walked these around but no one’s taking them,” lamented one of the male models passing around a tray of miniature, truffled grilled cheeses. (The chocolates, which came later, seemed to vanish as fast as they appeared.)

“It’s such a great group of women who have all these wonderful connections that they can use to help the hospital,” said Lonstein Gruss, wearing a show-stopping emerald necklace by Shourouk. She is still working on her namesake collection.

“My little 8-year-old loves fashion, too. She’s been to Charlotte [Ronson’s] show a few times. It’s the only show she goes to,” she laughed. “For me to be able to do something like that with my daughter is pretty amazing. It was fun. As I get older I do less and less, go to bed earlier and earlier.”

Herrera Lansing chimed in: “I only went to one show [during New York Fashion Week], but the joy of modern technology is that you actually get to see it all live, as its happening, from the front row, but without the chaos. I like that.”