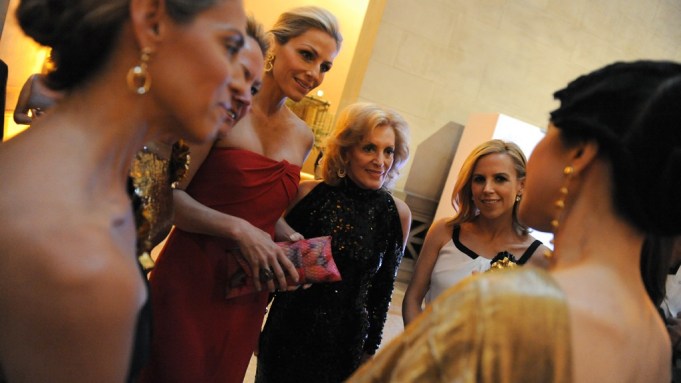 The fifth annual Society of Memorial Sloan-Kettering Cancer Center Spring Ball was glitzier than ever on Wednesday night, aided by a location change — the Temple of Dendur at the Metropolitan Museum of Art — and some heavily gilded gowns from the event’s sponsor, Gucci.

The emphasis was on “heavy” for Lauren Remington Platt: “This is not some flimsy garment,” she said of her gold floor length beaded dress.

“I’m really glad that Tory [Burch] thought of me, asked me to participate,” said Rob Thomas, the night’s post-dinner musical performer. Georgina Bloomberg was seated with the singer and his wife, Marisol Maldonado, and all three instantly fell into a conversation about charities, though of a more canine bent. Bloomberg, a professional equestrian, is a passionate animal lover.

“I have five dogs,” she explained, citing one’s adoption as a “life changing moment….I hadn’t grown up knowing about animal shelters, I adopted [this dog] and then really knew I had to become involved with this cause.” Thomas and Maldonado have recently opened a shelter in Puerto Rico, and have a few dogs themselves.

“It’s kind of sad, but our life revolves around these dogs,” Thomas shrugged.

“I have a son from a previous…he lives with his mom. He’s turning 14,” Thomas laughed, “Everything about that is wrong. How old am I?”

Maldonado smiled: “My dogs are my kids.”

Thomas later took to the stage to croon a selection of his greatest hits. He beamed out over the crowd midway through his performance: “That was a downer, wasn’t it, these songs? Well, after I’m done here, they’ve got a DJ, and there’s gonna be some dancing. I want you all to remember: there are people taking pictures here. Keep that s–t locked down. Keep it under control. You don’t want to see those pictures.”