By Marcy Medina and Lindzi Scharf on April 10, 2016
View Slideshow 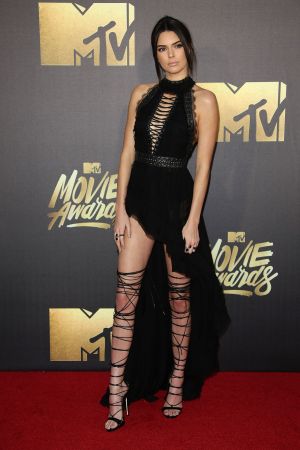 The MTV Movie Awards are a chance for some of Hollywood’s top actresses to let loose — relatively speaking — on the red carpet, dabbling in styles that more closely approximate their musical counterparts. At this year’s awards, held at Warner Bros. Studios in Burbank, Calif., Charlize Theron, Halle Berry, Jessica Chastain and Lizzy Caplan all went for a Goth-meets-glam vibe with sheer, black and sparkly looks. Models Cara Delevingne (or is she an actress? It’s fair to call her both), Gigi Hadid and Kendall Jenner also got the memo, choosing two dark pants looks and a signature sheer and leg-baring number, respectively.

Though she bucked the trend, Emilia Clarke still stood out in a sequined white Miu Miu sheath that would have been a standard classic but for the all-over face pattern. “’Game of Thrones’ is faces this year, so I’m paying my respect,” she said of the billboards throughout town heralding the show’s return this month. Clarke said she was most looking forward to “laughing a lot, and I hope the Best Kiss award gets some steamy action.”

She wasn’t disappointed. Adam Devine, who won Best Kiss with Rebel Wilson for their messy makeout session in “Pitch Perfect 2,” said, “Dreams do come true, kids. Keep smooching. One day you might get an award for it.”

Eighties hip-hop duo Salt-N-Pepa, who awarded Ryan Reynolds for Best Comedic Performance with a rendition of their hit “Shoop,” which they redid for his movie “Deadpool,” also turned it on for the red carpet. “I’m wearing Balmain from head to toe,” Pepa said. “This choker is choking the heck out of me, but in the name of fashion you’ve got to do it.”

Of their performance, she added, “It meant a lot, especially for us celebrating 30 years in the game.” But her fellow bandmate DJ Spinderella noted, “It meant more to our sons. We won’t lie: We’ve all got boys who love Marvel comics.”

“Teen Wolf” star Holland Roden, a big deal in her own right for the current MTV generation, said she was inspired by A-listers like Theron. “I appreciate Charlize Theron’s style because it’s classic. I love that chick; she’s a movie star. I’ve only seen her from afar. I do not make a point to say hello to anyone I admire.”