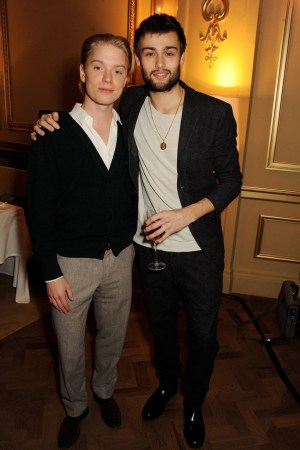 LONDON — “We like a snack in a posh room,” said Mr Porter editor-in-chief Jeremy Langmead beneath the frescoed ceilings of the Domino Room at Café Royal in London, where he was hosting a dinner marking an exclusive collection of Mulberry men’s bags. “I remember when I was in magazines, I always used to think it was very mean of fashion brands to have events in the middle of the week, when all I really wanted was to be at home eating tomato soup and reading the One Direction autobiography, volume three – so thank you for coming tonight.”

Langmead’s guests included young British actors Freddie Fox and Douglas Booth, “Downton Abbey” star Allen Leech, Tara and Isaac Ferry, and Friendly Fires front man Ed MacFarlane, who was planning to spend a month in solitude before Christmas. “I spent today getting may car serviced because I’m going to drive up to Edinburgh and then on to the Isle of Harris for a month of writing,” he said. “It’s the home of Harris Tweed and it’s in the middle of nowhere; north of the Isle of Skye. I have made sure there’ll be no distractions at all. No Internet, no nothing.”

Booth, who is set to appear alongside Fox in the film adaptation of the play “Posh,” described his co-star as “the best villain ever” for his role in an upcoming version of the Frankenstein story.

The collection comprises five classic Mulberry bags, reworked in canvas rather than the brand’s traditional leather. The Elkington briefcase comes in grey, the Brynmore satchel is available in black, while the Clipper holdall comes in black and grey, with a smaller version also available in blue.