Mulberry and Charles Finch teamed up for a pre-Globes “Out of Towners” dinner at one the Chateau Marmont. 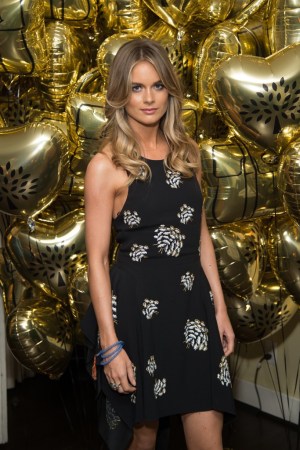 On Friday night, Mulberry and Charles Finch teamed up for a pre-Globes “Out of Towners” dinner at one of the brand’s favorite Los Angeles venues, Chateau Marmont’s Bungalow 1 and poolside bar. The weather had taken a chillier turn the day before, but for the Brits in attendance, it was still a touch tropical.

Freddie Fox, in town to promote his new show “Cucumber” at the Television Critics Association panels on Saturday, was buttoned up in a smart three-piece wool houndstooth suit by Huntsman, but said, “I was sunbathing this afternoon. It was three degrees [Celsius] in England when we left so 20 degrees [Celsius] feels like summer paradise,” he said. “Cres almost burnt, she got a little pink so we had to put her out of the sun to save her for tonight,” he added, referring to Cressida Bonas, with whom he appears in a Mulberry spring/summer short film that the brand was previewing at the party.

Actually, Bonas was the center of the film, and the only one who got to wear Mulberry clothes in it. “I love and adore Huntsman in terms of a gent’s Savile Row tailor, but of course, as soon as Mulberry starts shaping up for men, I will be there,” said Fox.

For Bonas, enjoying her second trip to Los Angeles, the short, backless spring 2015 Mulberry frock she chose for the party was a departure. “I’m normally wearing quite scruffy tomboy clothes so it’s nice for a change. I don’t often wear dresses and this is unusual for me because I normally would wear long,” she said.

Bonas wasn’t the only one who may have been a bit chilly for the sake of fashion. “Downton Abbey” star Lara Carmichael wore a Mulberry halter dress with open-work detail on the front. She quickly found her “Downton” costar Joanne Froggatt, with her very tall husband James Cannon, and formed a huddle. “You pretty much can spot my husband at any party and know I’ll be closeby,” said Froggatt, who was relishing her weekend as a Best Supporting Actress nominee. The two made chitchat with Christoph Waltz, while Rosamund Pike caught up with Poppy Delevingne, then Gillian Anderson.

“I loved the part towards the end when you two were sitting on the couch pretending to be happy,” Anderson told Pike of the final scenes in her film “Gone Girl,” for which she’s Best Actress-nominated. “Yes, there was a lot going on behind the smiles,” said Pike of the twisted marriage thriller in which she played opposite Ben Affleck.

Speaking of twisted marriages, “The Affair” star and Best Actor nominee Dominic West also found his way to the party, as did Camilla Belle and entrepreneur Elon Musk, who was making the party rounds all weekend, perhaps searching for a new venture, new friends, or a potential biopic. ​