Multitasking With Julie Macklowe at The Box

The party celebrated her birthday, launched her product line vbeauté and benefited the VH1 Save the Music Foundation. 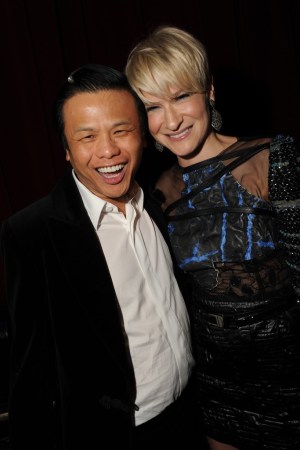 “Thank you for coming to my party,” Julie Macklowe cried from the front of the stage at The Box late on Saturday night. Macklowe, whose invitation identified her as a “multimillion-dollar hedge fund manager, fashionsocialite [sic], ‘It’ girl and mom,” had invited some of her nearest and dearest to come celebrate her birthday, launch her product line vbeauté and benefit the VH1 Save the Music Foundation, all at the same party.

“It’s a good cause,” Sean Paul, clad in a T-shirt that read “Babylon is Falling!” nodded after his performance. “It puts music back in the schools.” Had he used any vbeauté products yet? “I think there’s some in the gift bag,” the rapper said. Overhead, near the vodka-sponsored bar, an aerialist in a leotard spun from a Hula-Hoop suspended from the ceiling.

A number of designers (Jason Wu, Yigal Azrouël, Yang Toi, Chris Benz and Eddie Borgo) turned out for the fete, which, despite being held at a club once infamous for it’s X-rated burlesque, felt surprisingly demure on the evening in question. For one, all the performers were clothed.

“I wanted to play what they could dance to,” D’Cruz nodded, indicating a shimmying cluster near the stage made up of Adelina Wong Ettelson, Alina Cho, Alexandra Lebenthal and Sarah Easley. Ann Dexter-Jones showed up towards midnight, when most of the revelry was winding to a close and the dance floor was nearly deserted. “It’s not over, is it? I thought this place stayed open for ages?” Dexter-Jones asked, making way for the stage, where a trio had appeared to croon doo-wop songs in matching gold corseted gowns.

“I don’t know if this is more fun, or my actual birthday,” Macklowe laughed, as her husband scooped her up into a fireman-style carry for nearby photographers, the pair’s grinning faces nearly identical in the swirl of flashbulbs and disco lighting.