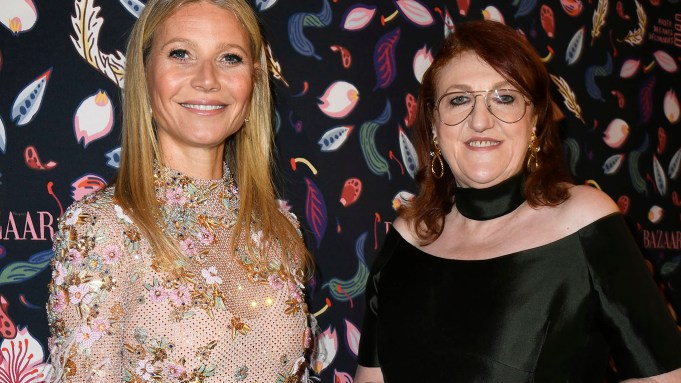 A NIGHT AT THE BAZAAR: “I’m so very proud of the path you’ve carved,” said Dame Zandra Rhodes as she came down from the steps of the Musée des Arts Décoratifs into the waiting arms of the evening’s host, Harper’s Bazaar outgoing editor in chief  Glenda Bailey, after the pink-haired designer had toured the “Harper’s Bazaar — First in Fashion” exhibition.

Outside the museum, a light show splashed headlines of the magazine and images as guests filtered inside for the Gala International de la Mode that celebrated the museum’s renovated fashion galleries. “One thing I always notice is where people are queuing to get in,” Bailey had said minutes earlier just as the doors opened. “Food shops, bakeries in particular, and museums. This is a time that people are deciding to [spend seeing] some beautiful imagery, something that moves them, something unique. I love the idea that Harper’s Bazaar in its print format is very tactile but at the same time it can go onto the walls of a museum and be truly inspiring.”

The evening was no maudlin farewell. As she gets ready to embark on the next stage of her career and perhaps even take the exhibition on tour, Bailey promised she intended to surprise. “I have so many different ideas, so I can see us doing something about thinking global but acting local. The next exhibition here might be ‘Harper’s Bazaar, chapter two, my next 10 years’,” she joked.

“I’m always around, so when they’re ready,” said musician and actress Janelle Monáe, who credits the publication with her artistic vocation. As she sets ready to star in horror film “Antebellum,” released in April, and the second season of psychological thriller “Homecoming,” she “remembered being young and going into CVS and seeing Harper’s Bazaar. Seeing so many artistic expressions made me want to be an artist.”

Also ready was Amanda Harlech, who began her fashion career as a junior fashion editor at the magazine’s British edition, then called Harper’s & Queen. “I’m just waiting to be asked,” quipped the Karl Lagerfeld muse, who got a camera and the instruction to “get on with it” from the late Chanel artistic director.

“Everything that starts with an A is good,” said Akris’ Albert Kriemler as he eyed the middle A of Bazaar dangling upside down above the exhibition’s door. He fondly recalled how Liz Tilberis, then the editor in chief of Bazaar, wrote an editor’s letter on the opening of a major French fashion house’s boutique in Boston, where most guests wore his design, as he’d opened his boutique there earlier in 1997. “It’s impressive how this publication had editors in chief with a lot of personality, and its own handwriting. It’s something we all strive for,” he said.

Speaking of big personalities, Rossy de Palma and Farida Khelfa exchanged effusive greetings as they arrived. “Being on the cover of Harper’s Bazaar, you can definitely say we’ve been there and done that,” the Spanish actress said. “Should be on every woman’s bucket list,” agreed the French documentary filmmaker and former model, whose documentary of female talents in Saudi Arabia will be shown during the next edition of Fashion Trust Arabia.

The richness of the exhibition had heads spinning. “The Dovima. No, actually, that’s not true. The Jean Shrimpton pink cover by David Bailey,” said Natasha Fraser-Cavassoni when prompted to name the first image that came to mind.

As the last guests arrived for dinner, American actress Abigail Spencer came out of the exhibition — again. “So good, I had to see it twice,” she said. “Well, three times, because I got waylaid during my second turn. This time I was alone in there and that’s how you should see it.” The star of “Reprisal,” a Hulu television drama centered around revenge-bent Katherine was impressed at how the exhibition highlighted the relationship between film and fashion. It also confirmed her own work method. “Whenever I’m developing a new character, my new best friend is the costume designer,” she added.

Gwyneth Paltrow summarized how the magazine had accompanied her, as it had countless readers, in her opening speech. “I was just 23 when I shot my first Bazaar cover and my last one [was] this past fall. In between, I’ve grown up, fallen in love, had two kids, changed careers, launched a company and discovered and uncovered more about myself, and the world, more than I could have ever imagined. It was almost chronicled in sometimes uncomfortably great details in the pages of Bazaar.” Her conclusion that the exhibition “is a testament to how fabulous Bazaar has been at every age” was met with thunderous applause.

After dinner, chairs were pushed back and dancing started in earnest, as Nile Rodgers took to the stage for rousing renditions of “I’m Coming Up”, “Crazy” and “Le Freak” among other tunes. As Louboutin cut a rug with de Palma, Rousteing called it a night to continue the fittings for his upcoming show, due to be held on Friday morning.