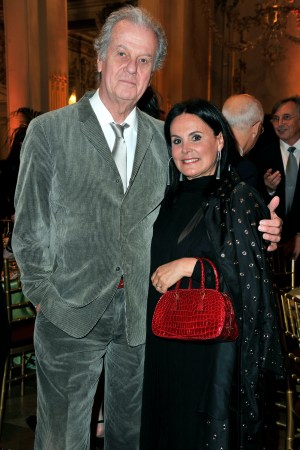 Terry de Gunzburg and Jacques Grange fell into fond reminiscence when they encountered each other at the annual Société des Amis du Musée d’Orsay gala on Monday night in Paris.

The celebrated interior designer is in a New York state of mind: He’s said he’s been contracted to create a new store design for Marc Jacobs, who is in the midst of overhauling his brand. The first unit is to debut in downtown Manhattan.

Grange said he’s also doing the uptown outpost for The Row slated to open later this spring. “I work very closely with Ashley and Mary-Kate,” he said, referring to the designing Olsen sisters, who last year signed a lease on a 1910 townhouse at 17 East 71st Street for their New York flagship.

Pierre Bergé arrived with Doris Brynner on his arm. Her arms glittered with embroideries that crept over her black Dior jacket. “From back when John Galliano was there,” she whispered.

All that was missing was the Countess Jacqueline de Ribes, honorary president of the friends of the Musée d’Orsay. Her friend Frédéric Mitterrand explained that she had a toxic reaction to medication and could not attend to deliver her speech in her musical voice.