Ruby was one artist being honored by the museum, along with Madeleine K. Albright. 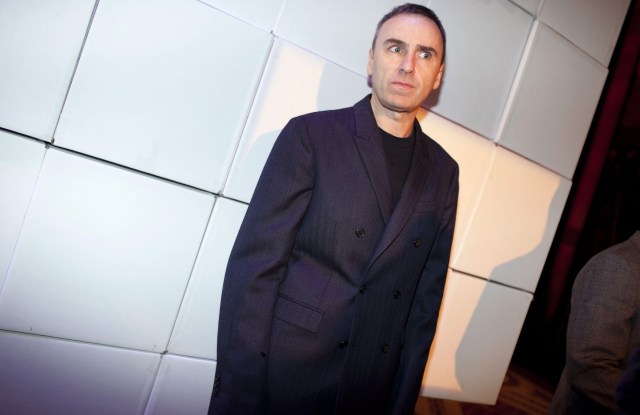 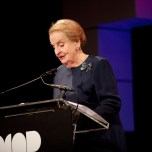 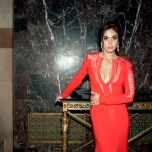 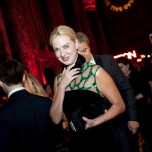 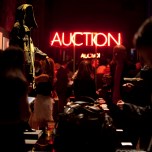 Raf Simons may be light on free time, but on Tuesday night the designer managed to carve out a few hours to support a friend.

“They’re Honoring Sterling [Ruby]. He’s like a brother to me, so it’s important,” said Simons, standing against the white-cubed backdrop built by the Museum of Arts and Design for its annual MAD Ball inside Cipriani 42 Street. “I’ve known Sterling for 12 years. I started collecting his work, and then we became friends, and then we started collaborating.” What does he like about the artist’s work? “Everything,” the designer said, and good thing: Sterling has put his mark all over the Calvin Klein physical spaces, from designing fashion show sets to the brand’s offices and retooled Madison Avenue boutique.

Despite being in the thick of work for his own brand, Simons noted more personal time on the horizon. “We’re leaving to Belgium on Friday actually,” he said, as partner Jean-Georges d’Orazio flipped through the event auction catalogue. “It’s nice to see family. My dad just turned 80 today.”

During cocktail hour, Ruby called out several of the museum’s past shows. “Really over the past couple of years, they’ve done such a phenomenal job programming,” said the Los Angeles-based artist. “I mean the Peter Voulkos show was really the most comprehensive show of Peter Voulkos ceramics that any U.S. institution has ever done. They did the Wendell Castle exhibition a year and a half ago, which was over-the-top good.”

“I hope that you will not think that I am boasting when I claim that I was the first American secretary of state to use jewelry as a tool of diplomacy,” Albright declared from the stage. “You can’t imagine Henry Kissinger or James Baker doing this. My predecessors would conduct diplomatic business while sporting fancy suits and power ties. When I took the office, I thought the time might be right to display pins with attitude.”

MAD premiered the first major exhibition of Albright’s collection of pins in 2009, which has toured the U.S. for the past decade, making stops at 22 venues, including eight of the 13 presidential libraries in the national archive system. The collection is headed to a permanent home at the U.S. Diplomacy Center next year, but during Tuesday’s gala, Albright announced that she’d gifted two of her personal pins to MAD: a dove given to her by Leah Rabin, the widow of Israeli prime minister Yitzhak Rabin, and a second she called “breaking the glass ceiling.”

“It shows the glass ceiling in its ideal condition, which is shattered,” Albright said. “And I still wear it in the belief that we will see the ultimate glass ceiling coming down.”

The evening also announced the establishment of the Burke Prize, a $50,000 award designed to be annual for an under-45 artist working in glass, fiber, clay, metals or wood.

For more from WWD on Raf Simons, see: