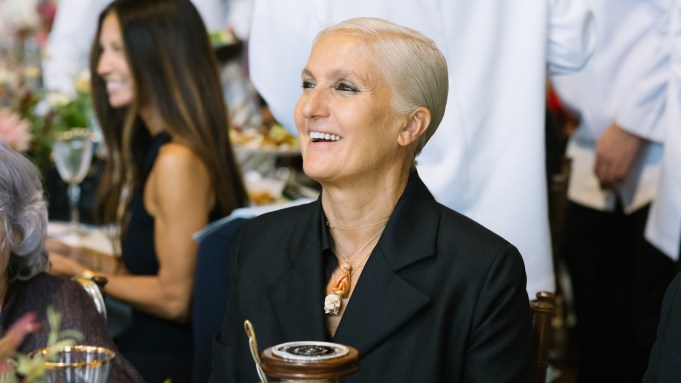 More than 350 Ladies Who Lunch — and a few men too — pulled out their finest Dior ensembles as they descended on the David H. Koch Theater at Lincoln Center to help kick off New York Fashion Week, despite the gloomy weather on Wednesday.

The event was to honor Maria Grazia Chiuri — creative director of women’s haute couture, ready-to-wear and accessories collections for Dior — who was presented with the 2022 Couture Council award for Artistry of Fashion by the Museum at FIT’s Couture Council.

Chiuri showed up in a fitted black Dior pantsuit and plain white sneakers.

“It’s because of the rain,” Chiuri said. “When it’s raining, I prefer comfortable shoes. I want to be safe.”

The Italian fashion designer — who arrived to the event surrounded by friends and fans, including her daughter Rachele Regini — said she was “very honored to be here at FIT; I never imagined in my career I’d receive this award. FIT is an important institute for fashion and culture. And we have to support all women in all different careers and to push other women to realize their dreams in fashion. Also, fashion is not easy. I think it’s important to recognize that this [career] could absolutely be hell.”

The guest of honor — who landed at Dior in 2016 by way of Fendi and Valentino — added that she only made two trips to New York during the pandemic. “So I am very excited to be here,” Chiuri said. “It feels like [New York Fashion Week] has come back to life, in some ways.”

Chiuri wasn’t the only one who could feel the excitement in the air. Halston creative director Ken Downing; Ali Wentworth; Nina Garcia; Candace Bushnell; Kat Graham; Fern Mallis; Decades boutique owner Cameron Silver, and Francisco Costa were just some of the attendees who flocked to the West Side luncheon, drinking rosy-colored cocktails while surrounded by fresh-cut flowers. Many were hoping to snag selfies with Chiuri.

“I’m certainly in awe of her talent,” said Veronica Webb, who was also decked out in Dior. “Her technical mastery of everything she makes is so on-point. It’s really exciting to see her honored for everything that she’s done in fashion.”

Samira Nasr, editor in chief of Harper’s Bazaar, who presented Chiuri with the annual award, said: “Meeting her was confirmation about the way Maria Grazia approaches fashion. It’s not an escape from the world, but as a way to take it in. A way to make sense of it and to embrace everyone and everything it has to offer.”

The luncheon was co-chaired by Julie Macklowe, founder and chief executive officer of The Macklowe Whiskey, and jewelry designer Kara Ross. Timo Weiland DJ’d the event, which was sponsored by Nordstrom and helped raise nearly $1 million for the museum.

“We’re still trying to establish ourselves [in New York City] and for us to be successful anywhere, we need to be connected to the communities that we serve,” Pete Nordstrom, president and chief brand officer of the department store, told WWD. “And this is a great way to be able to do that.

“And I came in and saw this beautiful room and thought, it was so nice, the chance to be in-person again together; it’s fantastic,” he added during his speech. “Everything looks great and there’s such great, positive energy here.”

“We are proud to honor Maria Grazia Chiuri, the first female creative director of women’s haute couture, ready-to-wear and accessories collections for Dior, with the 2022 Couture Council Award,” said Valerie Steele, director and chief curator of the Museum at FIT. “As [Chiuri] says, ‘When you are a woman making clothes for women, fashion is not just about how you look, it is about how you feel and how you think.’”

Joyce F. Brown, president of FIT, added: “Maria Grazia Chiuri believes that fashion is a fundamental part of life and, accordingly, designs with elegance and grace for women of all sizes, all ages and all shapes. Her vision — that one can be both a feminist and feminine — is reflected throughout her collections. For aspiring designers, such as the students at FIT, she is an inspiration and it is our honor to recognize her work and contributions to the world of fashion.”