A fashionable who's who turned out for the New York museum's annual gala. 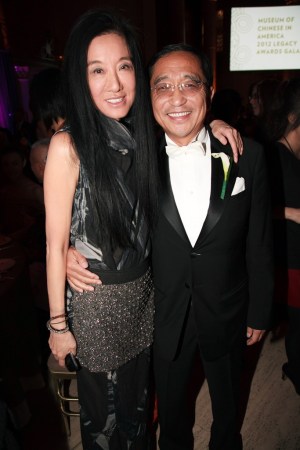 “We as an emerging minority in America have achieved so much. We are at very special moment in the history of Chinese in America,” said an ebullient Silas Chou, the fashion mogul who was honored with a Legacy Award, presented by architect Maya Lin. Chou urged the assembled designers to bring their businesses to China — and the billionaire pledged his aid in the process. “It’s lucky to live out one dream, which is here in America. Now, with the emergence of a new China, we have the chance to fulfill a second dream — the China Dream. I’ll be with you, I’ll help you and I’ll support you to realize a second dream in China.”

A phalanx of rising-star Chinese models was scattered at tables throughout Cipriani Wall Street — such as Sui He, Sun Fei Fei and Xiao Wen Ju — as were fashion types like Cecilia Dean, Harold Koda, Amy Fine Collins, Valerie Steele, Lily Kwong and Jen Brill. Kwong bonded with Humberto Leon over the simple, traditional jade necklaces they’ve both worn since birth for good fortune.

Leon and Carol Lim, founders of Opening Ceremony and co-creative directors at Kenzo, were also honored with a Legacy Award, presented by Alexa Chung, as were Vogue China editorial director Angelica Cheung and architect Calvin Tsao.

“Being second generation Asian-Americans, we were taught by our parents to always work hard, no matter what we did. I don’t think Carol or I ever thought that my job at the Gap and Carol’s at the Body Shop would ever get us here today,” said Leon. The duo confided they located their original Howard Street flagship in part for its close proximity to Chinatown dim sum and $15 massages.