Emma Stone, Andrew Garfield and a host of “Saturday Night Live” alums dined under the blue whale on Thursday night. 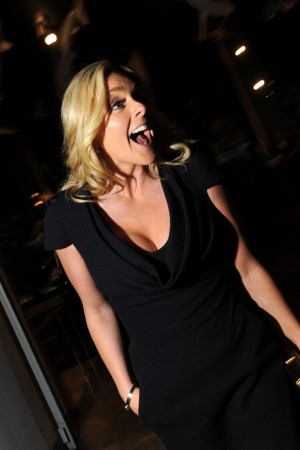 At the American Museum of Natural History Museum Gala on Thursday night, Emma Stone was not giving interviews.

“Not a chance,” a clipboard-wielding flack said of the Carven-clad actress. “Seriously, forget it.”

The publicist was walking backward while she shook her head, and nearly collided with Blythe Danner, who was picking her way through the party in search of her table.

“Excuse me?” the bemused Danner asked the woman politely. “Forget what?”

Coldplay was set to perform after dinner, which would give Danner a chance to see her son-in-law, Chris Martin, in action. Was she excited? The actress laughed.

Though they arrived at the event separately, Andrew Garfield seemed to be escorting Stone, his “Amazing Spider-Man” co-star. The Burberry-clad actor proffered his arm to the starlet for the descent from the Hall of Biodiversity into the Milstein Hall of Ocean Life.

“Very happy to be here,” Garfield nodded of the melee below, which from the stairs did look like leagues under the sea. Guests took on a coral-reef-like appearance from that distance. “It should be a fun night.”

The crowd assembled at the closely placed dinner tables under the museum’s giant blue whale had a decidedly comedic bent. Tina Fey, Seth Meyers, Steve Martin, Kristen Wiig and Jane Krakowski all present and accounted for, thanks to “Saturday Night Live” producer Lorne Michaels’ customary patronage of the evening.

Jimmy Fallon wasn’t sure how the night would go, despite the musical entertainment’s reputation as “easy-listening.”

“Coldplay may get us all going,” the comedian said before dinner, cocking an eyebrow. “You never can tell.”

Brian Williams hosted the auction with Sotheby’s James G. Niven, rattling off a diamond pendant from Graff, a sleepover at the museum for children and tickets to a taping of “Saturday Night Live,” among other items.

“The whale is a big draw,” Krakowski grinned of the plaster behemoth that hung from the rafters as Coldplay took to the stage. “That’s one of the best parts.”