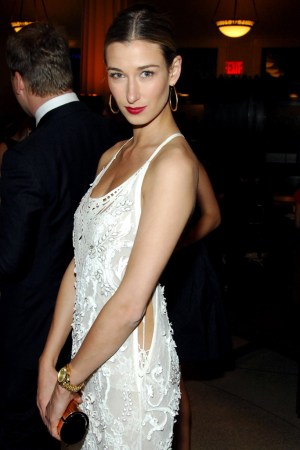 A blaze of blue spotlights illuminated the entrance to the Museum of Natural History on Thursday evening as New York’s social set filed in for this year’s Museum Dance.

“Let’s go get our snob on,” cracked one guest upon entering the grand venue. A brief cocktail hour kicked off the evening, as packed-in attendees mingled over glasses of Champagne and participated in the expansive silent auction benefitting the museum’s scientific and educational programming. Items up for grabs included a trip to Aspen, Fred Leighton jewels and a Proenza Schouler satchel, as well as a trip to a taping of Bravo’s “Watch What Happens Live” (listed retail value: priceless). Though the invitation called for “resortwear chic,” a nod to the evening’s “Under the Sea” theme, many guests, including Ivanka Trump, Sofia Sanchez Barrenechea and Lauren Remington Platt, opted to don the event sponsor, Roberto Cavalli — though not without a little fashion emergency.

“I was in the car on the way here, and I just heard, ‘Snap, snap, snap,’” said Platt, gesturing towards her gown’s revealing side-ties. “I made the car stop at Duane Reade for safety pins. I’m used to revealing some skin, but this was just a little too much.”

Wardrobe malfunctions resolved, Platt settled into her dinner seat to focus on a more pressing matter: which photo to Instagram.

Photo ops were plentiful as, unlike in previous years, Thursday’s dinner was held in the Theodore Roosevelt Rotunda, allowing guests to take in the museum’s Barosaurus skeleton over glasses of wine and chitchat about upcoming weekend plans.

Michelle Harper, also in Roberto Cavalli, arrived just in time to dig into the first course, a grapefruit and avocado salad, momentarily diverting attention from the colossal dinosaur with her glitzy eye makeup.

“My friend who does Björk’s makeup did it,” she shrugged without the bat of a crystal-adorned eye.