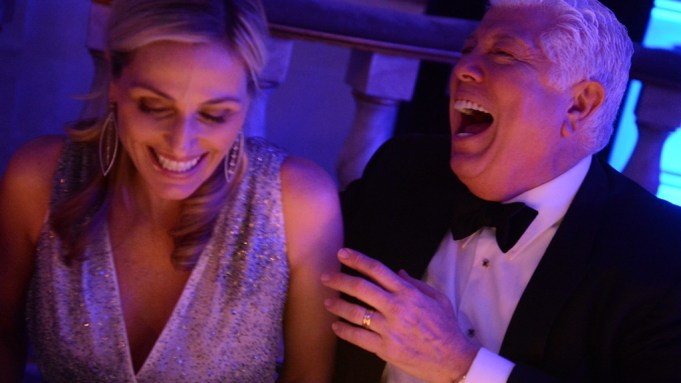 A sea of air-kisses washed over The Pierre hotel on Wednesday evening as black-tie-outfitted guests filed into cocktail hour of the Museum of the City of New York’s annual Winter Ball. The crowd — which included Jamie Tisch, Marina Rust Connor, Nicole Miller and Helen Lee Schifter, Jill and Andrew Roosevelt, Allison and Tara Rockefeller, Rachel and Ara Hovnanian, Steve and Christine Schwarzman, Shirin von Wulffen, Nina Griscom, Tory Burch and even an English lord, Viscount William Astor — chatted about past and pending getaways to warmer climates while taking in displays of Dennis Basso’s spring ballgowns that peppered the open room. Basso, a long-time friend of the museum, was sponsoring the evening.

“Mark Gilbertson is a dear friend of ours, and I love this museum,” Basso said, mentioning the perennial driving force of the gala. “If you go and see what’s there, it’s the history of New York City.”

Basso, rarely missing a beat to greet a passing friend, surveyed the room.“So many women here are Dennis Basso wearers,” the designer said. “I mean, there are a lot of my gowns here tonight.”

One of the rare attendees not in a Basso frock was Burch, who opted for a bejeweled dress of her own design. Just eight days after her fall runway show, the designer was already in the trenches of resort and spring. “I’m already onto the next,” she said, though admittedly looking forward to a bit of respite in coming days. “I’m taking my boys bonefishing in the Bahamas. With three boys, you have to entertain them.”

Fishing seemed to be one of the themes of the night: Miller had just returned from a fishing trip of her own, to Boca Grande, Fla.

After the dinner bell chimed, guests shuffled into the candle-lit dining room where the cocktail hour hobnobbing continued on, despite the distribution of the first course. Once all seats were finally filled, cochairman Gilbertson took the stage for opening remarks. “I just wanted to give you a little history, and I’ll keep it short. When I was a little boy…,” Gilbertson quipped before launching into the tale. “I was asked to start a committee in support of the Museum of the City of New York. So, I gathered some friends, we started a committee and had a Winter Ball in 1985. Tickets were $45 apiece. Twenty-nine years later, here I am. I’m a grown man now, and with the help of my cochairman, we have raised over $560,000 as of this afternoon.”

Museum supporters celebrated the figure well into the dessert course, at which point the DJ cranked up the volume. After a few moments of protest by means of shouting across the table, it was time to admit defeat. By the time the one-two punch of summer jams “Get Lucky” and “Blurred Lines” blasted, almost all had relocated to the dance floor.