The music industry crowned its newest royals and rewarded veterans at the 56th annual Grammy Awards, but it was Beyoncé who dominated the after party chatter.

By Ericka Franklin and Lindzi Scharf  on January 27, 2014
View Slideshow 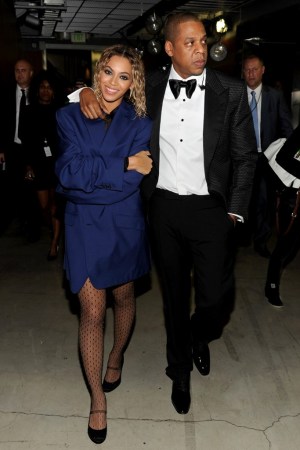 On Sunday night, awards were handed out during a Beyoncé concert. Yes, the music industry crowned its newest royals and rewarded longtime veterans at the 56th annual Grammy Awards, but it was Beyoncé — who wasn’t even nominated but opened the broadcast with Jay Z — who dominated the after-party chatter. Star after star name-checked Queen Bey’s steamy rendition of “Drunk in Love” as a highlight during a broadcast that offered many certifiable TV moments, not least of all an on-air mass wedding during a performance of “Same Love” by Macklemore and Ryan Lewis that featured Madonna.

The actress Anna Kendrick was at Universal Music Group’s after party at the newly remodeled The Theatre at Ace Hotel in downtown Los Angeles. She was a presenter at the show, with Pharrell, but confided her evening had actually peaked after her official duties were finished.

This story first appeared in the January 28, 2014 issue of WWD. Subscribe Today.

“As we were leaving, I met Beyoncé. She’s totally my hero, and she was so nice to me, I’m still shaking,” Kendrick gushed. “I’m surprised I’m not in tears right now.”

Kendrick was joined at the party by Katy Perry, who donned her fourth look of the night — a low-cut, sparkling blue halter gown — and new Grammy winner “Royals” singer Lorde, as well as the label’s Rita Ora, Ashanti, Colbie Caillat and Natasha Bedingfield. Perry said her Grammy highlights included Daft Punk’s performance and newcomer Kacey Musgraves’ big win in the country album category, where she beat heavyweights like Taylor Swift and Miranda Lambert. “I’m taking [Musgraves] on tour,” Perry said. “I love her. She deserves it. She made one of the most incredible records this past year.”

Musgraves was still pinching herself after winning in two categories. “What an incredible night,” said the 25-year-old country starlet, who had switched out of the Armani Privé dress she wore to the ceremony and into a cocktail number that, in her words, “went with our electric Western theme. It’s mariachi-inspired.”

She was still so flustered she didn’t quite know what she’d done with her new trophies. “They’re in my purse. I’m actually not sure,” she said. “I’ve always wanted to hold one of those little things.”

Grammys weekend officially kicked off Saturday when some of the biggest names in the business reported early to a brunch at a private location in Beverly Hills for Roc Nation, the label founded by Jay Z, and later headed over to Clive Davis’ Salute to Industry Icons at the Beverly Hilton. Rihanna made it to both.

By late Sunday evening, winners had an overabundance of venues to celebrate — Sony Music was at the Palm with Perry, Pharrell, Stevie Nicks and Miguel, while Madonna, Stevie Wonder, Paul McCartney, Beyoncé and Jay-Z, who won a prize for a collaboration with Justin Timberlake, reportedly headed to the Park Plaza Hotel to toast with Daft Punk, winners of album and record of the year.

Bruno Mars, Chris Martin, Trey Songz, Gary Clark Jr. and Lykke Li were at the Sunset Tower in West Hollywood for the party by Warner Music Group and Atlantic Records. Sevyn Streeter, a newcomer who’s penned songs for Ariana Grande, described the evening as a family reunion. “During the year, we all work so hard,” she said. “All of the artists are separated. Different countries. Different cities. During Grammy weekend, everybody is literally in one city, and I love that.”

Liz Goldwyn, wearing Givenchy, was enjoying her first Grammy night. “I feel like it’s a little bit more fun than film industry events because there’s good music,” she said. She was one of several personalities who admitted to not bothering to watch the show. The actress Regina King planned on watching clips later at home. The first performance she’d look up? “Obviously Beyoncé and Jay. I’d be un-American if I wasn’t,” she said.