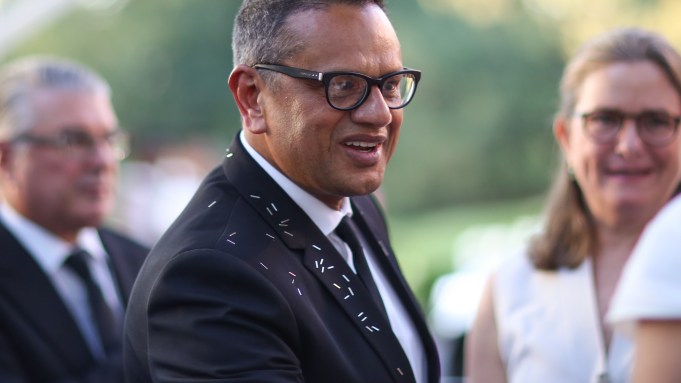 The New York Botanical Garden was buzzing on Thursday night. Manhattan’s social beehive headed to the Bronx in their finest florals for the 2017 Conservatory Ball, which featured more than 20 installations by artist Dale Chihuly.

“It’s like nature but made by man,” said Naeem Khan while admiring a large orange, red and yellow Chihuly work. “To me, this is part of history because you look at where these are made in Venice and all the other amazing places. This comes from hundreds of years of art and I relate to it because of what I do.” Khan and brand Verdura and Belperron were both sponsors of this year’s event.

Among the 500 guests at the ball were Jean Shafiroff, Gillian Miniter, Alexandra Lebenthal, Catherine Marlette Waddell and Linda Fargo. Fargo was garbed in a pink Naeem Khan dress punctuated by colorful Ranjana Khan earrings and was proudly showing off a pair of DIY shoes she had made that afternoon. “I felt they needed something,” she explained, adding that she had used a paperclip to hold the flowers on her heels in place. Crafty chic, no?

After a dinner of horseradish-crusted halibut and a “bird of paradise” dessert, Khan slipped out of the main tent to admire the gardens and reflect on their personal significance to him.

“My kids got married here,” he said. “I’ve been a gardener, I love nature, so to me, something like this you have to really preserve, and in today’s day and age with what’s happening with nature and they’re destroying things, this is important — especially today.”

“I think it’s a disaster for our country because we’ve been the leader of the world,” Khan said of Trump’s decision. “For us to send a message that we really don’t give a damn for the environment, it’s really putting my children at risk. The next generation is going to pay for this and the people who voted for this administration are going to pay for this. The amount of jobs that you’re going to lose and what’s going to happen to the Earth itself if people act the way we are, it’s not going to be so easy for them to do what they’re thinking because we have a lot of good things in place. So thank God that you have so many European nations that are going to protect as much as we can, but hopefully we’ll come to our senses and we’ll get back on track.”