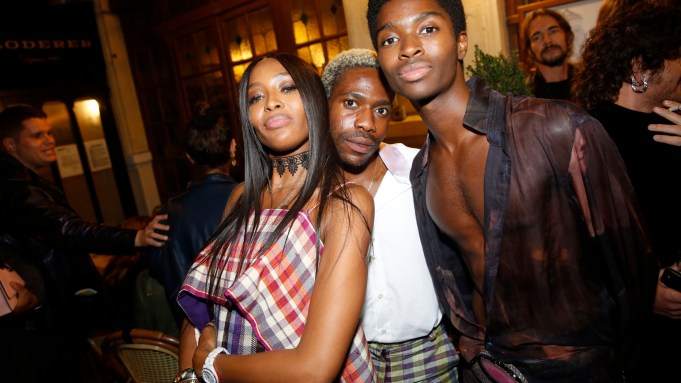 Ize, a finalist for the LVMH Prize, was basking in the attention. “I feel really honored to be here. It’s a journey and it’s just a sign of love. I believe strongly in love, and that is what is happening here, and I’m just very flattered,” he said.

Ize (pronounced Ee-zay), whose gender-fluid collection will launch at Browns in November, works with a colorful fabric inspired by the aso oke cloth woven by the Yoruba people.

“We absolutely fell in love with Kenneth, and I’ve just been working with him just to get him organized,” said Ida Petersson, buying director at Browns.

“For me, Kenneth is long term,” she added. “I think it’s really important with the young designers that you give them the confidence that you’re going to be behind them not like a very short time, but that you can be there as they set up and establish themselves.”

While Ize produces his fabric in Nigeria, he outsources the tailoring to Hungary and Bulgaria and the samples to Vienna, where he studied at the University of Applied Arts under Hussein Chalayan and Bernhard Willhelm.

“It’s all working well. Obviously, as a young designer, you face your challenges and I guess that is why Browns is so supportive, because they’ve been with me through this journey and they understand what it takes to deliver as a young brand,” he said.

“The point is for people to actually buy the clothes. I want Kenneth Ize to be on everybody’s doorstep,” he added. “It’s coming from things that could change a community. It’s positive, you know, so I guess this is why I want everyone to have it. I want people to just have a piece of where I’m from.”

Campbell, a longtime supporter of the brand, walked with Mason in Ize’s show in April at Arise Fashion Week in Lagos, which she co-owns. Petersson said she hoped the launch of the line at Browns would mark the beginning of a wave of new design talent from the African continent.

“I’ve been waiting for it for a really long time, so I just hope that will generate ripples in the same way that we saw the whole love for Scandinavia that happened about seven years ago,” she said. “This is, literally, like a tiny trickle of what Africa could become, because there’s so much talent that we haven’t even seen yet.”

In recent years, she has scouted fresh brands from South Korea, Japan and Georgia, and Shanghai is next on her radar.

“You have the big brands, and that’s great, and they have beautiful things and massive production, but actually what excites people now is that unknown, and finding something that is different,” Petersson explained. “Our customer is always hungry for the newest.”