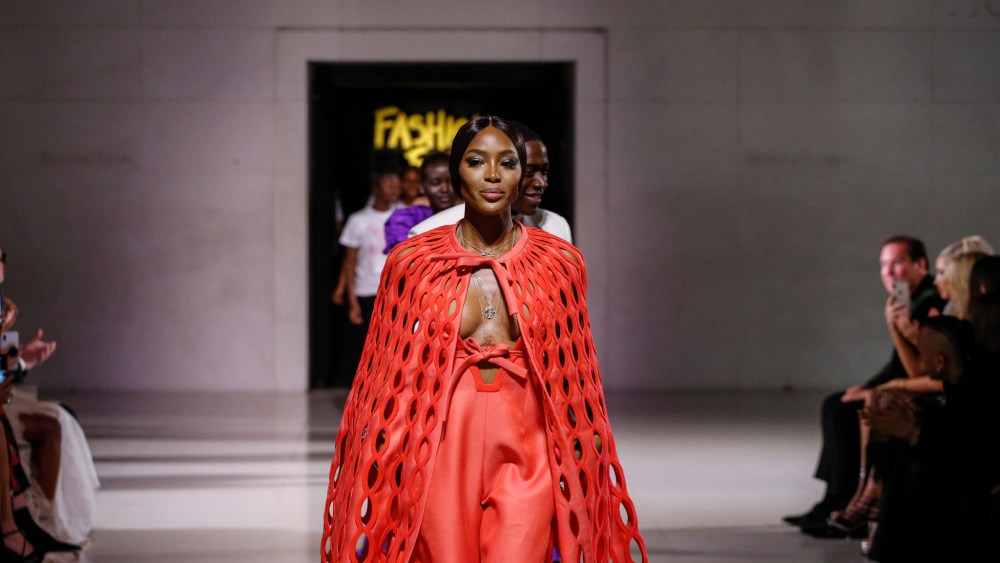 LONDON — Naomi Campbell is all about red-carpet moments and on Saturday night in London, she pulled out all the stops for her Fashion for Relief show, an annual charity event, held at the British Museum. As lights danced, guests surged up the museum steps including Skepta, Alexa Chung and Luke Evans.

Rapper Eve, who released her first song in six years, “Reloaded,” was wearing a cream full-length tiered dress by Rochas.

“London is home to me now, which is very weird to say,” she admitted. “L.A., to me, is work; this is actually home. Because I travel so much, my favorite thing to do when I am back is just to walk around Notting Hill, where we live. I don’t really get recognized or, if people do, they look at me, like, ‘Is that…?’ Or somebody will say, ‘You know who you look like?’ and I’ll just say, ‘I know! It’s crazy, right?'”

“High tea is my favorite thing to do in London; I always have to have high tea when I’m here. It’s just so cute. I love the little sandwiches; the cucumber ones. My grandmother always liked the cucumber sandwiches and now they’re my favorite, too,” Newton said.

As the main entrance of the museum filled up, the fashion started to get bigger and better, too. Evening gowns trailed along the concrete floor, lace veils masked faces and embellished suits complemented sequined cocktail dresses.

“Obviously, I’m not in a tie today, but I’m flashy, you know what I’m trying to say? Look at these kicks; they’re serious,” said rising rap star Octavian, lifting a foot clad in statement sneakers.

Octavian, who provided some of the entertainment at the gala dinner that followed the show, is getting ready to release his debut album: “I’m going out announce the name on my Instagram, so follow me on Instagram, do you know what I’m trying to say to you?”

Campbell, who was wearing a white leather dress with a gunshot-wound design from upcoming designer Mowalola, was among the last to arrive, along with Pierce Brosnan and son Paris, actress Naomie Harris wearing Mary Katrantzou, and models Maria Borges, Adut Akech Bior and Stella Maxwell.

The show started with a performance by Swedish singer Seinabo Sey. Designer Daniel Listmore opened the show with other famous faces in tow such as Aketch, Erin O’Connor and Maxwell in a quilted yellow skirt by Chrome Hearts, who sponsored the show.

“Supporting Fashion for Relief is personal for me. Naomi and I have been friends for decades and watching her compassion for the causes she chooses to champion is inspiring to me,” said Laurie Lynn Stark, coowner of Chrome Hearts.

“It was just recently that I had the idea for these quilted spiderweb designs, with the idea that the ‘web’ was a symbol of uniting the world. When I first talked to Naomi about the theme for this year’s show, I knew immediately that these pieces would be a perfect fit,” Stark added.

Other designs that walked the runway included outfits from Alexander McQueen, Givenchy, Iris Van Herpen and Tomo Koizumi. Campbell herself walked the runway in a multicolored sequined dress with feathered sleeves and a billowing red ensemble with a matching headpiece from the latest couture collection by Valentino.

The show drew to a close with 30 students from The Elmgreen School in West Norwood, dressed like Campbell in Fashion for Relief T-shirts.

“I’m truly happy to be bringing Fashion for Relief back to my hometown London. The fashion industry has really come together with Fashion for Relief and has shown it’s not just about looking good, it’s about being good and doing good,” she said.