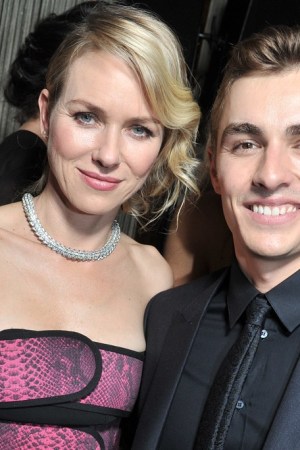 RETURN POLICY: Bulgari presented its latest accessories collection in Milan with a party at the Bulgari Hotel on Thursday night. Guests included Naomi Watts, who was decked out in a Serpenti necklace pavéd with more than 75 carats of diamonds. Watts was handing back the jewels after midnight. Would she be sad? “Yes and no,” the Oscar-nominated actress said over the din of music in the VIP area of the bar. “Yes because it would be nice to hold on to them, no because I’m too scared to have it in my possession. I’m quite happy to give it back, just to borrow.”

Watts recently completed filming Noah Baumbach’s “While We’re Young.” Costarring Ben Stiller and Amanda Seyfried, the comedy focuses on an uptight documentary filmmaker and his wife who befriend a free-spirited younger couple. “We’re inspired by the youth,” Watts said of her on-screen relationship with Stiller.

This story first appeared in the February 24, 2014 issue of WWD. Subscribe Today.

Dave Franco, former Miss World Zhang Zilin, Zhang Xinyuan and Izabel Goulart were among those invited to check out Bulgari’s fall handbags, including the new Icona 10, which pays homage to the jeweler’s flagship on Rome’s Via Condotti, set to reopen next month after a renovation.