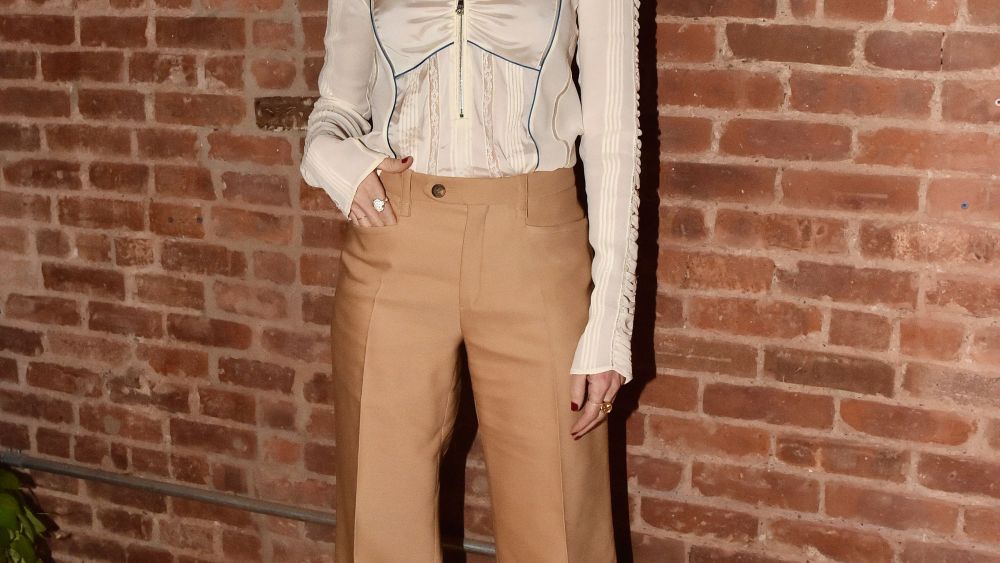 In true Parisian style, dinner was held fashionably late Thursday evening in celebration of Natacha Ramsay-Levi’s debut collection for Chloé, which just launched at The Webster Soho in New York. Appointed creative director of the French label last year, Ramsay-Levi, who on Wednesday night hosted a cocktail event at Saks after having just flown in from Europe, was fresh-faced as she greeted guests at a spacious Soho loft.

“What is important for me is Chloé isn’t a brand where the clothes take over your own silhouette or personality,” explained Ramsay-Levi, who co-hosted the event with The Webster’s founder Laure Hériard Dubreuil. “My wish is that a woman can mix all of these clothes and make them personal.”

The designer lent many personal touches to the evening — including a 16-mm film related to Steven Meisel’s campaign shoot — which was played on a loop beside the expansive banquet table. “We wanted it to be like when you used to project home movies. It’s this very intimate experience that I really try to push with the clothes.”

Guests included Naomi Watts, accompanied by stylist Jeanann Williams, plus Dree Hemingway, Mia Goth and Indré Rockefeller. “I’m not very overwhelmed [by fashion week],” admitted Watts, who is relishing in having some downtime between projects. “I’m not filming right now, but I’m in that very tricky stage when you’re trying to make decisions on a lot of different things. I have a few things I’m considering, which is a nice position to be in so I’m not complaining, but it’s highly pressurized because you want to make the right decision.”

Artist Chloe Wise was feeling conflicted. “I don’t want to talk about fashion week because I should really be working on art,” said the 27-year-old, who is compiling a portrait exhibition of “a lot of friends” slated to debut in Geneva in May. “Some of [my portrait subjects] are here, but I can’t say who. I’m just really feeling so much guilt right now because I should be working, but I love dinner. You don’t have to ask me twice to go to dinner.”

Wise, who normally cooks for herself from the kitchen of her multimedia art studio, wasn’t bothered by the 10 p.m. seating as she chatted with pals Sophie Koella and Haley Bennett, both of whom have appeared in Chloé campaigns.

“My acupuncturist told me that I have to eat dinner before 7 p.m.,” explained actor and designer Waris Ahluwalia. “This is something I’m actively trying to work on — eating before 8 p.m. — but tonight isn’t the night.”

Ahead of a surprise performance by singer-songwriter Cat Power, Chloé president Geoffroy de la Bourdonnaye gave a touching speech to the lady of the hour. “I would like to thank Natacha for having embraced the Chloé spirit so rapidly,” he said before highlighting several “facets of her spirit” that serve her well both as a creative force and as a leader. “Being intellectual doesn’t stop [her] from being a bon vivant: good wine and good cocktails always put [her] in high spirits and ready to party.”

Cardi B Is Back at NYFW