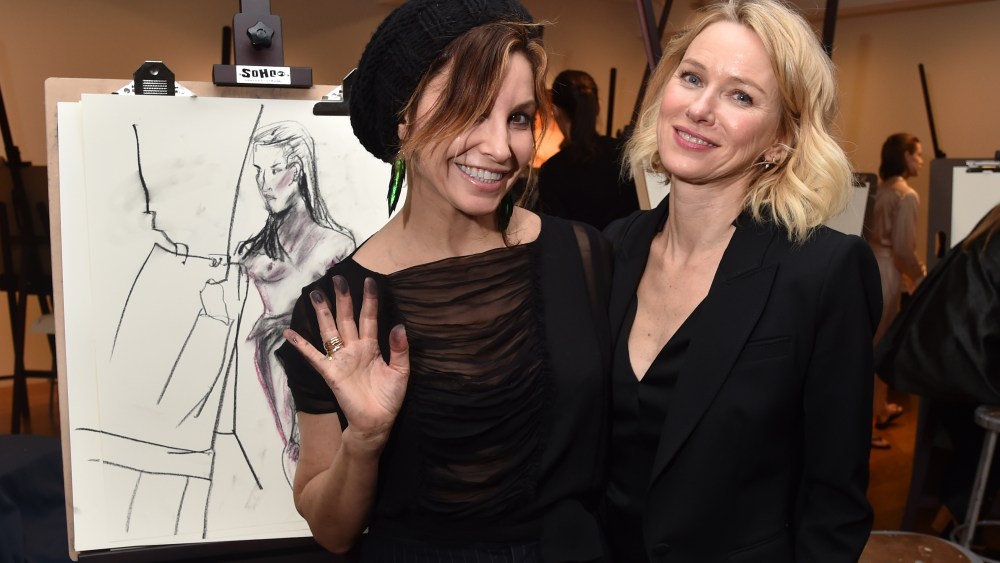 “Christina said to me, ‘Wear black, because you might get dirty.'”

Kristy Hinze Clark took gallerist Christina Di Donna’s advice to heart on Tuesday night, donning a black suit for the evening’s festivities. The pair, along with Naomi Watts, hosted a figurative drawing party at Di Donna Galleries in support of The New York Academy of Art. The school brought its easels and spread of various charcoals uptown for the evening, and an intimate crowd including Gina Gershon, Wendi Murdoch and Eileen Guggenheim followed.

By the end of the night, New York City might have gained a few more aspiring artists. After a brief drawing tutorial by a NYAA faculty member, several nude models emerged and struck poses for the crowd to draw. “I can guarantee there’s no other cocktail party going on like this tonight in the city,” offered NYAA president David Kratz.

“I’m not great, I only drew one time and it was at the last drawing party and I was very mediocre,” admitted Di Donna. “But I’m excited for the opportunity to try again. It’s always the people that surprise you. You think the art people are going to be really good, and then it’s some sleeper that shows up and is like Rembrandt.” Asked what the hardest part of the drawing process would be, Di Donna said, “Probably staying focused and not being distracted by the nude models.”

Naomi Watts — a devoted NYAA board member and ardent supporter — navigated around the few empty canvases throughout the gallery. The hardest part for the actress might just be finding time to sit down and draw amidst hosting duties.

“You know what? I guess I have a psychological block about [drawing] because I grew up in a family who were all great painters and artists and drawers, and I always felt like I was the one who didn’t have any artistic talent,” said Watts.

Of course, she eventually found her talent on the big screen.

“It took a while to find it though, when you’re a kid you can’t just be like, ‘Here’s a scene.’ ‘Here’s a picture’ is much easier for that instant feedback and for you to grow in your confidence as an artist,” she continued. “For me it was like, ‘Oh wow, [there are] artists all around me — which is inspiring — but which made me think, ‘Oh, what’s my talent?'”

The professionals in the room reflected a similar modesty.

“I didn’t go to art school, I taught myself, so I’m going to make it up like the rest of us. I’m going to pretend I heard what [the demonstrator] said,” said painter Damian Loeb, asked for his tips and tricks for approaching the task at hand — which, at the moment, was drawing the bare backsides of two models perched atop several boxes.