Naomi Watts costars with Jake Glyenhaal in the film directed by Jean-Marc Vallée. 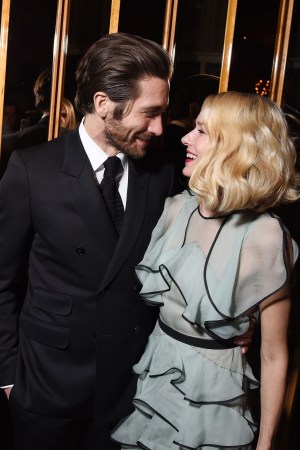 “It started with Jean-Marc [Vallée], I’m obviously a great fan of his work,” said Naomi Watts, speaking before a Monday night screening of “Demolition” at SVA Theatre in New York. The actress was stunning in an ethereal gown from Valentino’s fall 2016 collection. “I heard he had a great script — you always read it much faster when it’s in the hands of a great filmmaker.”

Watts costars in the Vallée-directed film with Jake Gyllenhaal, whose character begins to unravel (and, as the title suggests, demolish) his life after the sudden death of his wife. Watts’ character serves as a sympathetic net for him, and inspires reparation.

“I liked that she was kind of drifting through life but she was able to wake up and make some big improvements and changes,” Watts reflected. “They’re kind of both suffering from similar things on different levels. They’re manifesting in different ways, but they do need that jolt,” she continued, snapping her fingers for emphasis.  “I’ve had periods of my life where I’ve had to shake it up, definitely.”

The cast was joined by Helena Christensen, Chris Benz, Ebon Moss-Bachrach, and June Ambrose for the Cinema Society and Fox Searchlight-sponsored screening.

“[Gyllenhaal] reminded me of my kids,” revealed “Demolition” supporting actress Polly Draper — referring to her sons (and actors) Nat and Alex Wolff. “They admire him so much,” she continued. “Jake’s maybe 10 or 15 years older than they are, but he has that same vibe of being a real person, a really versatile actor — and he’s just a lot of fun.”

Glyenhaal’s fun reputation was up for debate amongst print reporters after he elected to skip all interviews. Another talent from the film chose to phone it in for the night: the screening opened with a video recording of  Vallée, speaking from the west coast. Aptly enough, the clip ended with him shattering a glass pane behind him. Afterwards at Top of the Standard, the film’s influence had a less visible impact on the crowd, who stuck to demolishing only the drinks and hors d’oeuvres.