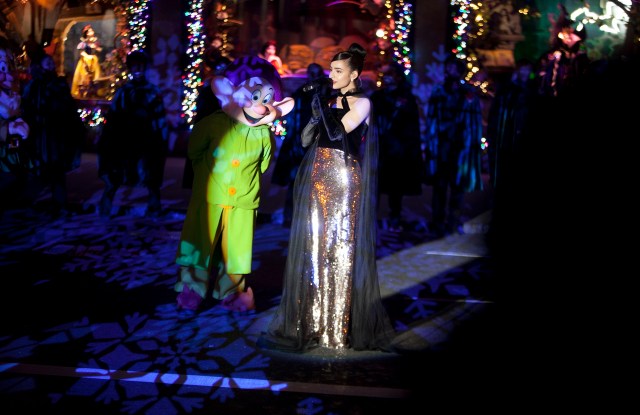 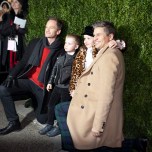 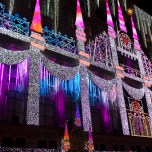 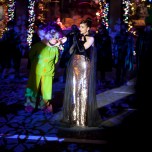 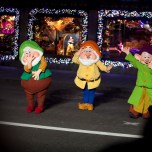 “I didn’t know there was going to be fireworks, I didn’t know that there would be dancers, I think a camera guy almost took a header. It was very exciting,” said Neil Patrick Harris, describing what had just taken place moments before at the unveiling of Saks Fifth Avenue’s holiday windows on Monday night. This year, Saks partnered with Disney on a Snow White theme in honor of the 80th anniversary of “Snow White and the Seven Dwarfs.” Monday night’s big reveal didn’t disappoint.

Disney had seemingly worked its magic on the exterior of Saks’ New York flagship, transforming the store into one of its iconic castles. The block in front of the store had been closed off for a street performance during which Disney Channel star Sofia Carson sang. As Harris said, there were fireworks, there were dancers — including Snow White and seven dwarfs — and yes, a camera guy did in fact take a header.

“Getting to walk up and down and look at these windows is something that’s accessible to everyone as opposed to buying a high-priced ticket and having to cough up a lot of cash,” Harris continued. “This is something that your whole family can come and do as part of their day and still have it be a bit of a tradition.” He was briefly interrupted by his daughter, Harper Grace, who delivered a short and sweet “P.S. Harper says hi” before adding that for Christmas, she would like “Snow White something.” If only Marc Metrick had heard.

Naomi Watts also made an appearance at the unveiling. “New York feels more Christmas-y than anywhere else in the world,” she said. A “Jungle Book” fan, she added that her favorite Christmas activity is “going to Australia with my boys,” where they have a tradition of “pulling out my grandfather’s dressing gown — we pull it out and somebody has to wear it and act like him and hand out the presents.”

By contrast, Harris said he’s usually in New York for Christmas. “We usually celebrate Christmas Eve dinner out at Babbo, Mario Batali’s restaurant — he has a big, formal Feast of the Seven Fishes Italian meal, so the four of us go and these kids get to sit for three hours and eat crazy adventurous seafood,” he explained. “Then we open gifts. We tend to get a lot of gifts, so we parcel them out, so we’re still opening a single gift every day [in] late January.” Here’s hoping a “Snow White something” is in the mix for Harper this year.