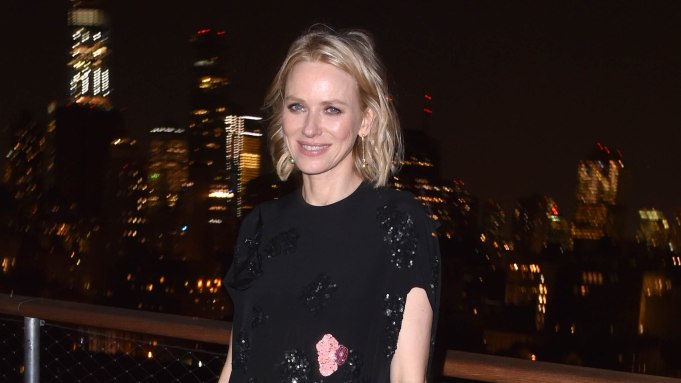 It’s not easy for Naomi Watts to go incognito.

The actress was very much the conspicuous center of attention Thursday night at the Cinema Society premiere party for her new Netflix series “Gypsy,” in which she plays Jean, a seemingly typical therapist living a dark double-life under the pseudonym Diane.

Guests gathered in the newly opened Public Hotel’s chilled subterranean screening room to preview the first episode of the drama, which reads as part psychological thriller and part character study, with Watts at the center.

“I’ve definitely given a false name for my coffee,” revealed the English-born actress who wore a loose-fitting Valentino frock for the affair. “I don’t like them calling out my name. I give [the baristas] stupid names that have no meaning to my life, but when I got the role I did try out Diane just to be goofy.”

Billy Crudup, who plays Watts’ straight-laced husband, was noticeably absent from the evening, but other cast members in attendance admitted to not being as daring as their on-screen characters when it comes to testing the limits of deception.

“Everybody always says they give fake jobs or names to their Uber drivers and stuff like that and I’m always so hyped and ready to do that, but when they ask I stutter and just say I’m an actress,” said Lucy Boynton. “And I don’t drive so I use Uber all the time.”

Sophie Cookson, who plays opposite Watts as a clandestine love interest, noted how her co-star would occasionally improvise dialogue in one-on-one scenes together. “Naomi’s great at throwing little curve balls — it’s good to be cheeky with each other,” noted Cookson.

Behind a flooding strobe of flashbulbs, Brenda Vaccaro’s signature husky voice pervaded the room like smoke from a fine cigar. “I’m so excited to be in the series and I hope to Christ they pick it up,” said the youthful veteran actress. “I got an apartment and I’m here three months early before I know if they’re picking it up or not, but I don’t give a s–t. I’m so happy to be back in New York City.”

Recently relocating from Los Angeles, the Emmy winner recounted her last trip to New York, during which she barhopped in the West Village until 4 a.m. only to be awoken the next day by hotel security conducting a welfare check. “I’ve just been having the best time,” exclaimed the 77-year-old.

Vaccaro, who exuded her joie de vivre over libations at the hotel’s rooftop after party, is joined in the series by longtime pal Blythe Danner (also absent from the premiere) and explained that Danner’s daughter Gwyneth Paltrow has always been “smart and very ambitious, aggressive and smart.”

Tony hairstyles were lost to the brisk humid wind whipping across the late-night soiree as the fashionable crowd snacked from plates of lump crabmeat on bread, shrimp cocktail and chicken skewers delivered intermittently to the ravenous guests.

Perched on a long picnic table offering sweeping panoramic views of the Manhattan skyline, Watts engaged in a tête-à-tête with pal Adrien Brody as other recognizable faces including Ben Stiller, Julie Taymor, Haim, Pat Cleveland, Nicole Miller, Anna Sui and Zach Braff circled around them — proving this was perhaps not the best place to launch a phony identity.