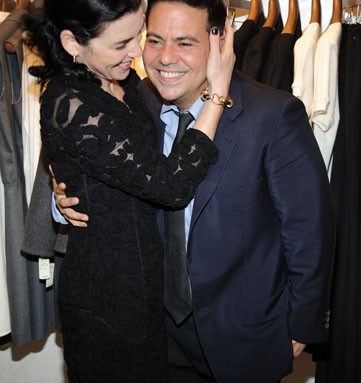 Narciso Rodriguez has always had his loyal group of devotees.

On Thursday night, they packed the third floor of Bergdorf Goodman to sip mojitos and Champagne as the designer signed copies of his new tome, “Narciso Rodriguez,” a collection of photographs, sketches and text that narrate his creative process.

“He’s my friend,” said Margulies of her loyalty. “If he hadn’t sent me something to wear tonight, I would have gone in my closet and picked out something of his from 10 years ago.”

Rodriguez, sporting a new black mini hoop earring (“the piercing is ancient — I got it when I was a teenager. You haven’t been paying attention!” he chided curious guests) was happy to get behind the camera for the images in his book.

“Today fashion is tougher than photography,” he said of his multiple hats.

Towards the tail end, Jessica Alba made an appearance, posing arm in arm with Jaime King before settling in to chat with Rodriguez’s father, in from New Jersey for the party along with his wife. And he was highly modest about any contributions he made to his son’s success.

“I did nothing,” smiled Narciso Sr.