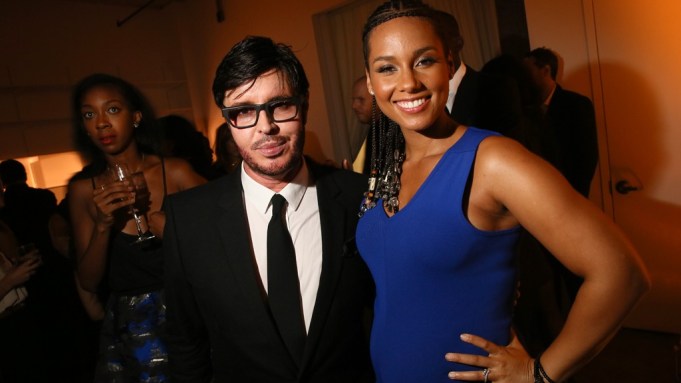 The Champagne was flowing and margaritas abundant when Linda Evangelista, Fabien Baron and Simon Doonan teamed up Thursday night in SoHo to fete the 20th anniversary of François Nars’ cosmetics brand.

Baron festooned the event space with images from Nars’ four books and the many eye-catching ad campaigns Nars has shot for his brand, but the makeup artist himself — just back from a vacation in his native France — was already on to his next project: a new book, due in 2016. Looking around at a crowd, which included Alicia Keys, Abigail Breslin and Lizzie Jagger, Nars appeared to be sizing up the crowd for potential portraits. “It’s a celebrity book with a very eclectic group of people,” he said, declining to name names. “There will be some people from the fashion business, some actors, musicians, sports people — men and women both young and older. I’m shooting this year and all next year — I’m shooting 160 portraits.”

As for what the next 20 years will bring, Nars noted. “I’ll keep doing what I’ve been doing without asking myself too many questions. I hope it works.”

Nars noted that naming his products is one aspect of the job he especially enjoys. “That’s the fun part,” he grinned, naming “Belle de Jour” and “Shanghai Express” among his favorites. And that famous blush? “I never thought Orgasm was going to be such a success,” he said. “I liked the name and I liked the color, and that was it. But in the end, women are the only judges. It doesn’t matter if I love one product more than another — if it’s not a success with the woman out there, it doesn’t matter in the end what I think.”

Nars plans to key the makeup at just one Fashion Week production: Marc Jacobs Thursday show. “I did so many shows for so many years for so many designers that I decided to stop and do something else,” he said. “Marc is the only one I want to do.”