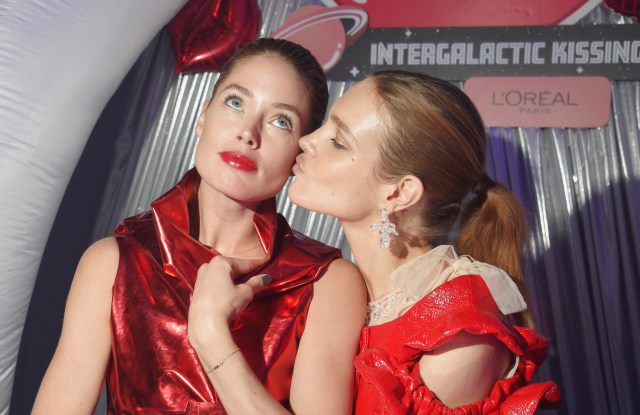 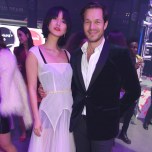 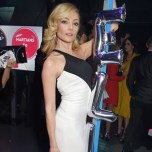 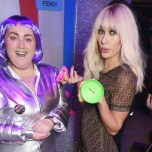 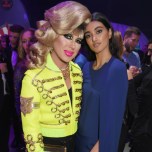 STAR STRUCK: Natalia Vodianova was back at the Roundhouse in Camden, London, to close out London Fashion Week with another London’s Fabulous Fund Fair charity event, this time with an intergalactic spin on the event’s fun fair-style format.

Guests were greeted on the red carpet by astronauts and given a passport to be stamped at a “Passport Control” desk before entering the main event, with silver spandex-clad attendants bidding them to “enjoy the flight.”

Inside, the spinning swings of a silver “UFO-Go-Round” whirled guests including Pixie Lott and Lottie Moss around the space that was encircled with luxury fairground stands, given a cosmic twist, manned by VIP overseers, where guests could spend carnival tokens with a monetary value at the stands to win some exclusive prizes from a slew of LVMH brands.

This year, Natasha Poly was manning the By Kilian stand, where guests raced the clock to unlock a series of lockboxes to find a key to open the vault containing a prize. “I’m obsessed with makeup and am always trying to find new techniques and looks. And tonight I wanted to go all-out so I used waterproof eyeliner for the lines and glued on the crystals,” she told WWD, adding that she’d picked up her black crystal headdress at much-loved London costume store So High Soho earlier that day.

“I would definitely love to go on a trip to outer space,” she said. “I want to be able to see the planets. When I was growing up, I had this image of a galaxy in my head. If something went wrong, I would panic and think, ‘This is it; I’m gonna die.’ But at least I would have seen space it would be one of those moments in your life that, when you experience it, you think, ‘OK that’s it. I can die now.'”

Actress Tamsin Egerton was less enthused with the idea. “Absolutely no way. When I was a child, I had anxiety that I would float off into the sky to be lost in the universe because I didn’t understand gravity. It still scares me. Plus, I’m claustrophobic. If there was a crisis, I’d probably just have a panic attack and have to lie down,” she admitted. “And I have children now, which makes you want to appreciate this planet more. No, I’m quite happy with my feet on the ground, thank you.”

The metallic trend that glistened on the London catwalks was wholeheartedly embraced by guests, with sequined or lamé dresses of silver, copper, red or gold glittering on Emilia Wickstead, Izabel Goulart, Montana Cox and philanthropist and model Noëlla Coursaris Musunka, who is the latest global ambassador for Global Fund.

Musunka, who founded Malaika, a nonprofit organization that works to empower Congolese girls and their communities through education and health programs, said she’d love to take her children into space. “They’re little adventurers and my son, who is 12, is learning about the solar system at school and so I would love to take him on a trip to see Mars and Neptune.”

She had the first world problem of having to select her copper Marco de Vincenzo dress herself because her preferred stylist, Jenke Ahmed Tailly, was unavailable — because he was busy finagling a dress from the Pierre Cardin archive for Vodianova.

“My mom, who I lost eight years ago, used to wear Pierre Cardin and he is one of my special ‘godfathers,’ so it was very special to have access to their archive,” he explained.

Vodianova, who arrived at the bash in a laminated tweed coat fresh off the Simone Rocha fall 2018 catwalk, donned the incredible dress — cut from shimmering silver cloth with huge disc sleeves — to address her guests and urge them to spend their chips to raise money for her foundation, which raises money to help children with special needs. “The number-one priority for the foundation this year is training specialists to work with special needs children because the more specialists we have, the more children we can help,” she told WWD. The night raised $840,000 for the charity.

We wanted the intergalactic theme this time because it’s just so rich and creative, with so many great references seen in music, film, and fashion,” she said. “I know I don’t look like her tonight, but my number-one intergalactic reference is…’Barbarella.'”

British actor Joseph Mawle had less success with his look. “I mean, this is not an easy theme to do as a guy and not look totally bonkers,” he said, pointing out the red T-shirt under he slipped under his black suit and the pink glitter he dusted over his hair and neck to comply with the evening’s theme. “I mean, I could have tried to get a hold of a silver suit like that guy but I’m not that guy. When would you ever wear it again? I’m just happy I could wear my trainers — they look kind of spacey, don’t they?”

“This is quite the spectacle, isn’t it?” commented former ballet soloist Eric Underwood. “It’s even better than seeing Kate Moss pop out of Mert Alas’ birthday cake last night.”

Other guests included Doutzen Kroes, who was puckering up as the host of the L’Oréal kissing booth; Hailey Baldwin, who manned the Fendi stand; Lara Stone, who monitored the rocket racers at the Messika stand, as well as Oliver Cheshire, Betty Bachz, Paul Sculfor, Julia Restoin Roitfeld, Clara Paget, Stella Tennant, Stella McCartney, Edie Campbell, Valentino Garavani, Raye, Neelam Gill, Tigerlily Taylor and Jodie Harsh, who snapped a heel on her way into the party and spent the first half of the evening desperately trying to stick it back on. “But I just slipped on a pair of flip-flops while I was DJing because that’s just what you do, isn’t it, babes?”