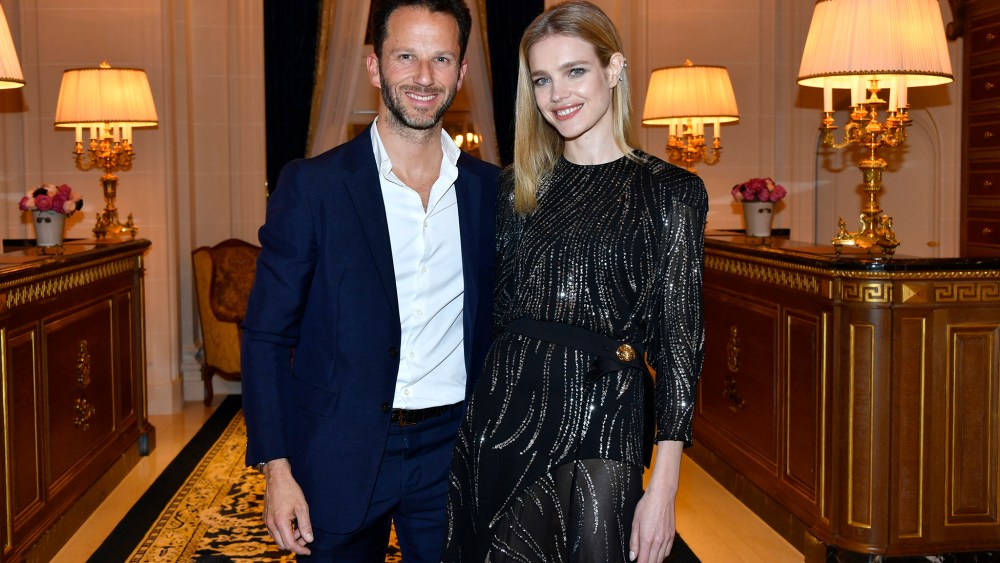 Curated by galerist Magda Danysz, this exhibition which includes works by artists Li Hongbo, Stella Sujin and Liu Bolin, had previously been shown at K11 in Shanghai and in Paris at the ASIA NOW art fair held Oct. 20 to 23. Guests, including curator Pamela Golbin, Lesage’s artistic director Hubert Barrère and lace manufacturer Olivier Noyon, stood fascinated as a docent unfolded Chinese artist Li Hongbo’s paper bust, among the works of the 13 artists who contributed to the exhibition. Others had eyes on the Natalia Vase, where sculptor Yi Zhou captured a stylized likeness of Vodianova in white marble.

“The exhibition [and the charity auction were] our way to thank Natalia,” said Etam’s managing director Laurent Milchior, third generation at the helm of the family-owned group, which also includes brands Undiz and 1,2,3. “She is an absolutely passionate, unique individual, and we are still close to her, and the causes dear to her.”

Noyon’s family-run lace manufacturer Noyon — now formally Société Noyon Dentelles — recently went under administration and was saved by a consortium of its clients including Etam. “It’s the first time in our branch that clients enter the capital of a supplier. The know-how and archives were precious resources and this was understood. More than a financial decision, this is also an opportunity for us as lace producers to understand our true customer, women. Lace accompanies the dream, the mystery, femininity in all its shapes and forms,” he said. Noyon manufactured the lace designed by photographer Rose-Lynn Fischer who used microscopic Daguerreotypes of tears as patterns.

As dinner was served, auctioneers Sandra Nedvetskaia and François de Ricqlès, along with actor Fabrice Luchini, started a rousing round of bids to auction off the works. The evening raised over 100,000 euros, or a little over $105,400 at current exchange rates. Etam’s general brand manager Marie Schott, speaking after the auction had concluded, revealed that no reserve price had been set. “François [de Ricqlès] came to ask me if we would set one but we wanted to give everyone an opportunity to place a bid, as any contribution big or small is welcome.”

On the eve of International Women’s Day, conversations focused on the underlying theme of the exhibition.

Vodianova wanted to look at a bigger picture than International Women’s Day. “In a world where we want to find equality, to still have the International Women’s Day highlights the issues,” the philanthropist, mother and model said. “If you erase their existence by eliminating them from thought, you create the reality you want to have. A day of equality would make more sense.”

Model Maria Borges, the newly announced face of L’Oréal Paris offered: “Be yourself. Be confident.” Tiara-headbands designer Amber Sakai, wearing one of her heartbeat designs on her brow, concurred. “Be active, be present, be part of the solution,” she said. “We need something to light us up, particularly now,” she added, pointing out her favorite of the exhibition, the Dependent light sculpture by Jeanne Susplugas.

“Women are the heart of our house, and I owe everything I know to women,” said Olivier Echaudemaison, artistic director of Guerlain and a longtime friend of Vodianova. “I am a little disappointed that International Women’s Day is still necessary today.”

Parisian “It” girl Jeanne Damas, recently included in French Forbes’ first 30-under-30 list, said feminine independence was “the freedom to be yourself, to do what you want.” She was currently preparing the new season of her brand Rouje, a “brand from Instagram, for followers” as well as a book of women’s portraits, to be published in the fall by editor Grasset.

Jewelry designer and street style star Michelle Elie offered the most compact summary. Women’s independence, she said, is “everything.”